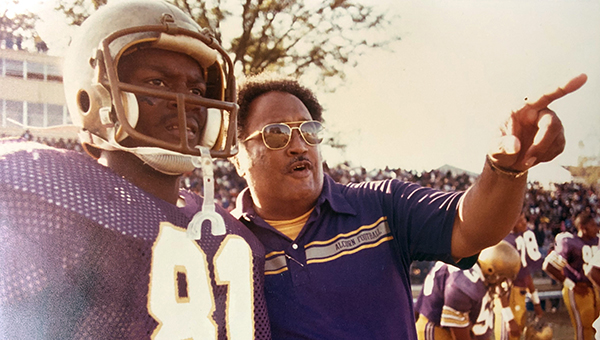 Former Alcorn State football coach Marino Casem, right, died Saturday at the age of 85. Casem won seven SWAC championships with the Braves and had a 132-65-8 record from 1964-85. He later was the school’s athletics director. (Alcorn State Athletics)

LORMAN — One of the most iconic figures in the history of Alcorn State University athletics, Marino Casem, passed away in his home Saturday afternoon at the age of 85.

Known as “The Godfather,” Casem was the head football coach at Alcorn for 22 seasons and served as director of athletics for 20 years. He’s the winningest football coach in the history of Alcorn athletics, amassing a record of 132-65-8 from 1964-1985.

During his coaching tenure, Alcorn won seven SWAC football championships and Casem was named SWAC Coach of the Year seven times. He also coached the Braves to four Black National Titles in 1967, 1968, 1973 and 1984.

As an athletic director, Casem led the effort in building the Davey L. Whitney Complex, the home of the Alcorn basketball and volleyball programs. It opened in 1975.

Alcorn plays its home football games in a stadium named in his honor, Jack Spinks-Marino Casem Stadium. Casem first arrived at Alcorn as an assistant coach in 1959, along with Spinks, and the two were close friends.

DeMichael Harris and Drake Dorbeck are no longer teammates, but they still have something in common — they both will... read more