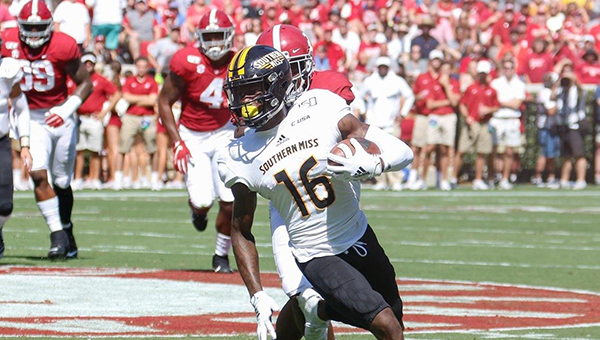 After eight players with Mississippi ties were selected in the first three rounds of the NFL draft, the final day’s picks took the total to a baker’s dozen.

Cole was drafted by Minnesota, and Charles by the Washington Redskins. Stevens went to the New Orleans Saints in the seventh round.

Hightower played two seasons at Hinds Community College before going to Boise. He and Watkins were both selected by the Philadelphia Eagles, in the fifth and sixth rounds, respectively.

The two receivers were among four the Eagles acquired during the three days of the draft. They took TCU’s Jalen Reagor in the first round on Thursday, then made a trade with the San Francisco 49ers to get veteran Marquise Goodwin.

“Can he run? Is he healthy? Does he love to play? That was going to be our offseason motto,” Eagles general manager Howie Roseman said.

“A lot of people may not know me now, but really by the end of the season people are going to know me,” Watkins said. “I’m really not somebody that’s going to try to stay off to the side. I’m going to show up to the competition and show everybody what I’m about, show them I’m ready to play and show them why I’m an Eagle.”

“I was running track before I started playing football, so the track background definitely helped me with my quickness, being able to outrun defenders,” he said.

The Redskins’ fourth-round selection of Charles gave them a successor to disgruntled left tackle Trent Williams.

Williams was traded to San Francisco for two picks — a fifth-rounder in 2020 and a third-rounder in 2021 — after a two-year contract dispute that had at times turned nasty. They took San Diego State center Keith Ismael with the pick from the 49ers, and used their own fourth-rounder on Charles.

Charles said the series of events shows what the Redskins “might have in mind” for him.

Charles, who was the starting left tackle for LSU’s 2019 national championship team, likely would’ve been a higher pick if not for a six-game suspension for a positive drug test. He said he learned from his “dumb, boneheaded type of mistakes” and was honest with team officials who asked about the situation.

“They believe in me,” Charles said. “They gave me a chance. And for that, I feel like I’m going to give the Redskins organization everything I got.”

Cole was among the last picks in the draft, selected 249th out of 255 players by the Minnesota Vikings.

Cole was a team captain and started 12 games for the Bulldogs in 2019 at the hybrid safety-linebacker STAR position. He finished third on the team in tackles with 65, and second in tackles for loss with 7.5.

Cole said he had just accepted a free agent deal with the Seattle Seahawks when he got the phone call informing him the Vikings had picked him late in the seventh round.

“Next thing you know, the phone rings and I see it’s from Minnesota and I’m like, ‘This can’t be real,” Cole said. “I couldn’t even hear because my family is all here and they were freaking out and going crazy. It’s just a blessing.”

No free physicals for high school athletes, for now

High school athletes at Vicksburg and Warren Central will not need to get new physicals to participate in tryouts for... read more