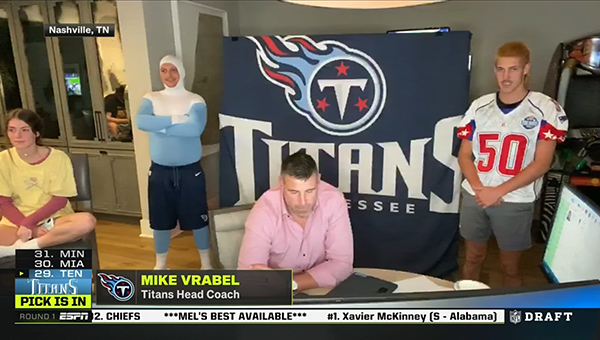 In this screen capture, Tennessee Titans head coach Mike Vrabel and his children wait to make the team’s pick during the first round of the NFL draft on Thursday. (From Twitter)

Like many Americans, I eagerly looked forward to watching the first round of the NFL draft on Thursday night. After six sportsless weeks and the endless drumbeat of coronavirus coverage, a couple of nights of real sports would be a welcome distraction.

What followed was four hours of coverage that became entertaining mostly because of how surreal and bizarre it was.

Joe Burrow looked like he’d just been sentenced to five years of hard labor in a gulag after being picked by the Bengals. The camera in Tua Tagovailoa’s house appeared to have a frozen feed as he and his family stared straight ahead without moving. Henry Ruggs was wearing a bathrobe, and CeeDee Lamb quickly snatched his phone back from his girlfriend before she discovered some incriminating evidence.

And that was all a couple of hours before we got a look at the house of Titans coach Mike Vrabel, where one of his kids appeared to be on the toilet and another was wearing a body suit behind him.

Roger Goodell stumbled through a couple of Hawaiian names that always vex him. I’m really hoping he announces all 250-plus draft picks, just to hear him try to pronounce the name of a random Samoan lineman from BYU when he’s punch drunk in the seventh round on Saturday.

The theme of the night, though, was how ESPN and ABC seemed to do everything they could to take this fun and uplifting event and put a tragic twist on it.

It started with a 12-year-old boy named Fletcher, who is undergoing cancer treatment at St. Jude’s Research Hospital. He got to introduce the Browns’ first-round pick. It was indeed a triumph in the face of horrible tragedy, yet also a little random and awkward.

Next came Ruggs, who was drafted No. 12 overall by the Raiders. Included in his personal draft facts was that his best friend was killed in a car accident in high school. A touching story about what that friend meant to Ruggs followed, but the initial placement was even more random awkwardness.

From there, it seemed like every draft pick had endured some horrific tragedy in their past. One had a sister who needed a bone marrow transplant. Two had parents who died, one in a horrible accident and another who committed suicide. A tragic backstory seemed as important as a fast 40-yard dash time in evaluating this year’s prospects.

Those stories were mixed with commercials reminding us to maintain hope in the face of the COVID-19 pandemic.

As a newsperson, I understand that you tell these stories because they are important. In many cases the tragedies served as inspiration to the players affected, as they strive to honor the memories of their loved ones. The backstories are touching and inspiring.

As a viewer and football fan, it was a surreal twist in an already surreal time. Not quite the uplifting distraction we were looking for.

There are two more days of the draft as I’m writing this on Friday afternoon. Here’s hoping we get just as much goofiness over the last six rounds, and maybe a touch less of the life and death struggles. We’re dealing with enough of that the rest of the time.