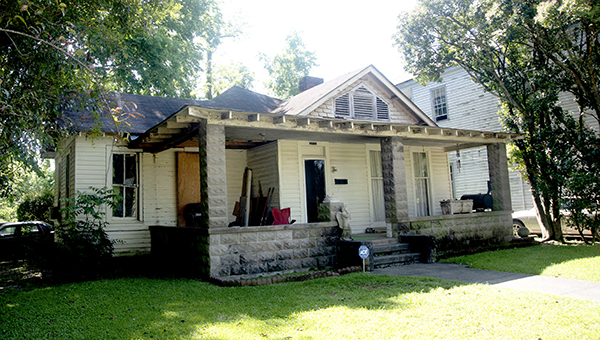 Two homes in Vicksburg are getting new life under a partnership program between the city and the Mississippi Home Corp. to improve housing in the area.

The Board of Mayor and Aldermen on April 23  approved two contracts totaling $145,263 with Dixon Interior Finishing Inc. of Jackson to rehabilitate homes at 1703 Grove St. and 2601 Drummond Street.

Money for the work is provided through a $705,000 Home Partnership Grant from the Mississippi Home Corp., city housing director Gertrude Young said. To qualify for the program, people had to be elderly, low income, own and live in the home, have a clear title to the property and have no debt.

“We’ve been trying to get it (the grant) for four years; I hope we can get something rolling now,” said Luther Judge, who owns the home at 1703 Grove St. “I think everything’s good to roll now. That’ll be great for me. It will help me out a lot. I’m glad to get it going; I hope they can start pretty soon.”

Begun in 2016, the grant provided money to raze and build two, two-bedroom, two-bath homes with a value of up to $127,000 per home, and rehabilitate five homes. No match was required by the city, and all the property owners have to do in return is maintain their property and insurance.

“We’re setting up a ribbon-cutting for those two,” she said.

Young said work on the five rehabilitation projects slowed because of weather and COVID-19, forcing the city to request an eight-month extension from Mississippi Home Corp. to complete the homes on Grove and Drummond.

The cost of the rehabilitation project for the Grove St. home is $60,340, according to the contract with Dixon.

Young said the project involves work to the home’s exterior, roof and interior, bathroom and bedrooms, and modifications to make it handicapped accessible. She said Judge also has a U.S. Department of Agriculture rural development grant for the home, adding the work funded by that grant will be done first.

The cost of work on the home at 2601 Drummond St. is $84,923 and involves improvements to the electrical system, roof, and the home’s interior and exterior, including the windows. The house is located in a historic part of town and requires special attention.

Nancy Bell, executive director of the Vicksburg Foundation for Historic Preservation, said the Drummond Street home, which was built in 1905, is in a district on the National Register of Historic Places.

“It’s a bungalow; it’s a contributing building within the district,” she said.

Because of the house’s and the area’s distinction, Young said, the work has to be approached differently.

“We have to do it a little differently because we have to bring it back the way it was,” she said. “We had to go through (state) Archives and History.”

One issue that needs to be addressed, she said, is the home’s windows. Because the house is a historic home, the windows must be replaced using the same type of glass originally installed in the home or an improved substitute.

One program is a blight elimination grant through Mississippi Home Corp.

Under the blight elimination program, the city will remove selected homes with a clear title.

The blight partner, a nonprofit corporation, buys the dilapidated property and builds the new home on the site after the old building is removed. The new home is then sold to a new owner.

Vicksburg was the first city in the state to implement the blight grant.

Mississippi Legislature will reconvene May 18

JACKSON (AP) — The Mississippi Legislature will reconvene May 18, two months after the session was suspended because of the... read more