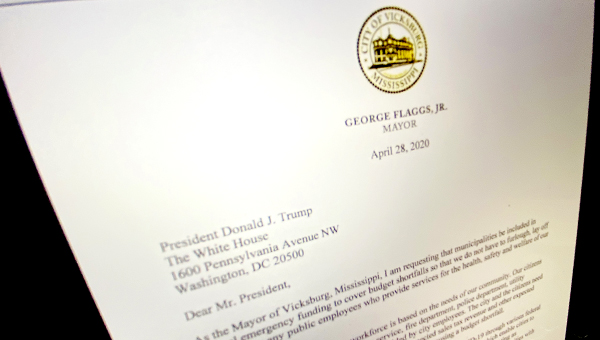 In a letter to President Trump Tuesday, Mayor George Flaggs Jr. requested “municipalities be included in Federal emergency funding to cover budget shortfalls so that we do not have to furlough, lay off or terminate any public employees who provide services for the health, safety and welfare of our communities.”

During a question and answer session last week, Flaggs said the city’s workforce could be cut as much as 10 percent due to the expected decline in sales tax revenues as a result of the economic slowdown and business restrictions brought about by the spread of the COVID-19 virus. Flaggs is expected to discuss that possible situation Tuesday evening during another question and answer session to be broadcast live on The Vicksburg Post’s Facebook page.

In his letter, Flaggs said the expected reimbursement from state and federal agencies for some city services is appreciated, but the shortfall in revenues is an area of deep concern for him and other local leaders whose budgets depend on sales tax revenues.

“We appreciate the funding of unanticipated expenses due to COVID-19 through various federal agencies; however, the loss of revenue necessary to sustain employees which enable cities to provide services for health, safety and welfare to our citizens is just as devastating as unanticipated expenses,” Flaggs wrote. “We hope that the federal government will be able to assist cities with emergency funding of loss of revenue due to COVID-19.”

The shelter-in-place order that was extended by the Warren County Board of Supervisors to May 4 could be extended. Tuesday,... read more