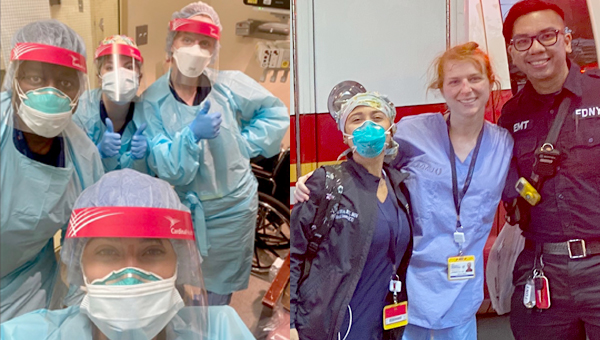 Vicksburg nurse in N.Y.C: ‘There was nothing I could do except stand at her bedside and cry’

Maybe it’s just in her DNA. As a third-generation nurse — both mother and grandmother were nurses — and with a father “who would give you the shirt off his back,” Kelli Brewer was raised in a family where helping is the norm. So when the Vicksburg native made the decision to go to New York City and help during their COVID-19 outbreak, it was just the next right step in her life.

For nearly a month now, after having experienced an internal instinct, or “pull” as she said, to go and help, Brewer has not only been lending a needed hand, she has witnessed up close and personal the effects of the COVID-19 virus in the NYC community — a place many would call the center of the international response to this global pandemic.

“I’m not a crier, but I have cried many days. There have been so many hurdles. The biggest challenge has been COVID itself,” she said. “The stuff that it creates in your lungs is just like cement. My hardest day was when my patient suffocated more or less from the secretions and there was nothing I could do except stand at her bedside and cry my eyes out … something I had never done.”

Brewer, a 2010 graduate of Vicksburg High School, is a travel nurse. Prior to going to New York, she had a contract with the Monroe Carell Jr. Children’s Hospital at Vanderbilt University in Nashville, where she had been working in the emergency room.

She said the process for volunteering took about three weeks, and the organization she is with is associated with the Federal Emergency Management Agency.

“We’re a true disaster relief,” Brewer said. “There are almost 1,000 workers in my hotel alone.”

While in New York, Brewer said the process for receiving assignments has evolved. Typically, a first responder receives a call, and then he or she is assigned to a particular hospital.

One of Brewer’s assignments was at a post-anesthesia care unit, which had been converted into an Intensive Care Unit.

Despite the fact personal protective gear was worn at all times, Brewer said being exposed constantly still gave her pause. But, in the end, she said she knew “God had me.”

Workdays are long for Brewer, as well as all the other first responders who have made their way to the city.

“We get up early and catch a company supply bus to work. We get there around 6:45 a.m. and then work 12 hours on the floor and then it’s back to the hotel,” she said. “For me, the night includes scalding my skin off, making a few calls or texting and then sleeping, just to get up to do it all again the next day.”

Meals are provided while at the hospital and, once back at the hotel, food delivery services like GrubHub and Uber Eats are used.

As a travel nurse, Brewer said she learned how to acclimate to the workings of individual hospitals. With this experience, she has learned to become more reliant on herself, which has made her stronger.

“I’ve always been level headed in emergent situations, but more so I think from working beside first-year residents thrown to the fire. Previously it was my job to do as they said, here it’s been a bit of nurses taking charge and helping them along,” she said. “I’ve become more resourceful and adaptable since we didn’t always have what we needed.”

In the midst of all the suffering that has accompanied the COVID-19 pandemic, Brewer said she has made new friends who have helped sustain her while in New York.

“I have made two nurse friends who have been my family for 21 days. They are the ones who have been there to hold my hand and comfort me. We have relied on each other,” Brewer said. “This has been the battlefield of the healthcare world, and with what we’ve seen and done, it would be almost impossible for it not to affect someone in some form or fashion.”

It has been hard, Brewer said, but there have been moments of joy.

After 21 days of witnessing so many deaths, Brewer said she had one patient who finally left the ICU. The patient spoke Spanish, so rudimentary sign language was a primary form of communication between the two.

“My God, I can’t describe the feeling of watching him get out of the ICU and making a heart symbol at me as he rolled out,” she said. “I made a difference to him.

Brewer said she hopes that by sharing her story she can stress the importance social distancing can have and is having.

“If what I have said makes one single person continue to stay home, I have been successful. I know a lot of people have been frustrated with the distancing, but it’s impossible to get people to understand what we’ve seen in New York and make them understand,” she said. “So, even if you choose to go about your life after the distancing is lifted, still go get your grandparent’s groceries. It could be the difference of having them for years or them dying alone in a hospital.”

Traffic stops during curfew hours are leading to arrests, other charges

As of Monday morning, more than 100 people have been charged with violating the city’s general public curfew that is... read more