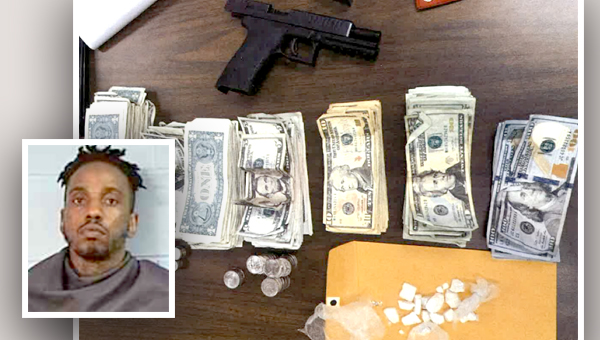 An on-going investigation by the Vicksburg Police Department resulted in an arrest Thursday and the confiscation of drugs, a gun and cash.

Appiph Perkins, 37, of Vicksburg, was arrested by officers of the Vicksburg Police Department Narcotics/Net Team.

At the time of his arrest, Perkins was in possession of approximately one ounce of crack cocaine, a stolen 9mm handgun, and $3,365 in cash.

His bond was set at $195,000 and he was bound over to the Warren County Grand Jury. Perkins was already out on bonds for aggravated assault and robbery.

• On Thursday, at 12:07 p.m., officers responded to a residence in the 2500 block of Confederate Avenue in reference to a theft. The victim reported someone stole his 3-month-old Pit Bull valued at $350.

• On Thursday, at 8:48 p.m, officers responded to the 1300 block of Chambers Street in reference to an auto burglary. The victim reported someone entered a Honda Accord and stole a purse containing a Social Security card, a driver’s license and a debit card. The vehicle had been left unlocked.