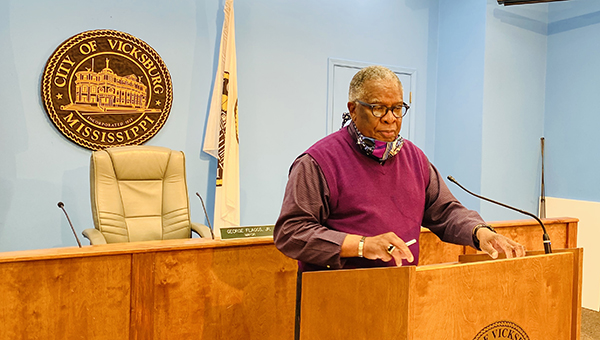 Due to an expected plummet in sales tax revenues, the city of Vicksburg could soon see a drastic cut in the size of the city’s workforce and those workers could experience a huge cut in pay.

During a Tuesday press conference, where he detailed how restaurants, pet groomers and outdoor recreation facilities could soon reopen, Mayor George Flaggs Jr. also laid out a dismal view of the city’s projected revenues.

With casinos still closed and the city’s sizeable tourism industry shuttered due to restrictions brought about by the spread of the COVID-19 virus and various shelter-in-place orders, the city’s budget is facing at the very minimum a 16 percent loss tied to casino revenue alone.

Based on projections, Flaggs said the city is looking at a loss of $2.8 million in revenues compared to last year on top of a $1.4 million deficit at the start of the fiscal year due to the property tax adjustment from the downsizing of Entergy’s Baxter Wilson facility.

Flaggs said that if the Mississippi Legislature is not able to provide some of the $1.25 billion in federal funds recently allocated to the state to the city of Vicksburg’s coffers, then drastic cuts will be needed.

He said those cuts could include a 12 percent reduction in the size of the city’s workforce and those remaining employees taking an across-the-board 5 percent pay cut. He said those employees that are part of the city’s public utilities would not be affected since those departments technically “pay for themselves” through service fees.

In addition to public utility workers, Flaggs said after the meeting that frontline police officers and investigators, along with firefighters would not be impacted by any cuts.

Flaggs also said the city could look at cutting back the number of hours city employees work and moving to four-day work weeks.

He said the Legislature has until June 15 to provide some assistance to prevent significant city-wide staffing cuts being initiated.

He said the decision would be based on a comparison of fiscal 2019 tax revenues with 2020 revenue from the start of COVID-19 in mid-March and revenue projections to July 1. The June 15 deadline, Flaggs said, gives him time to review the data and issue a two-week notice if the cuts go into effect

“It’s clear to me that we’re going to have to do something if the Legislature doesn’t reimburse us for some of the lost revenue,” he said.

He anticipates a drop in sales tax revenue combined with a reduction in property tax revenue, adding the city has already lost 16 percent of its revenue because the city’s four casinos have closed.

Those longing to visit their favorite Vicksburg restaurant and enjoy a dinner away from the house do not have to... read more