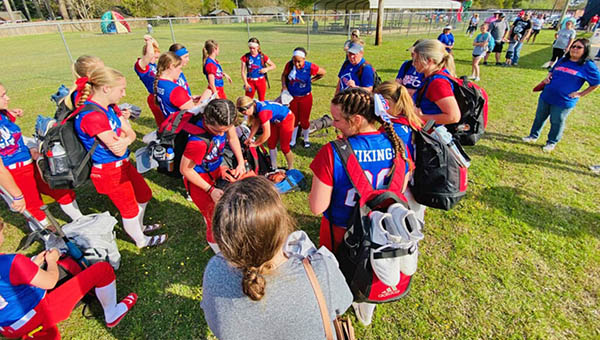 Warren Central softball players pack up their bags after a game in the Brookhaven Tournament on March 14. It was the final game of an undefeated season for the Lady Vikes, before the MHSAA suspended competition and later canceled the 2020 season because of the coronavirus outbreak. (Tim Reeves/The Vicksburg Post)

Warren Central’s softball team was having a dream season.

The Lady Vikes were 11-0, scoring nearly 12 runs per game, and steamrolling opponents left and right. They were one win away from matching the program’s win total of the previous two years combined, and a few more from clinching the first winning record since 2015.

They wound up having to settle for an undefeated season they’d rather not have had.

The Lady Vikes played their last game on March 14, the same day the Mississippi High School Activities Association suspended competition statewide because of the coronavirus pandemic. The season officially ended a month later, when the MHSAA canceled the remainder of its spring sports calendar.

For Warren Central and other teams like it, there was a sense of what might have been and an opportunity lost even if they understand why it happened.

“We were playing well and were excited about our district, so it was disappointing. Especially for the seniors,” Warren Central coach Dana McGivney said. “They were all playing well, and to have the season cut short it was heartbreaking for them.”

Warren Central’s last two games were at the Brookhaven tournament on March 14. They beat Brookhaven 11-3 and Loyd Star 5-2 in a pair of games shortened to four and five innings, respectively, by a time limit, on a sunny Saturday afternoon. It was at the end of a week, however, where the sports world imploded. The wave of coronavirus-fueled shutdowns swept through professional sports, and then to the college level, and finally down to high school over a span of four days.

By the time they left the field for the final time, the Lady Vikes had a sense that it would at least be a while before the season resumed. It never did.

“I think the seniors kind of knew,” senior shortstop Kaylee Hoeft said. “When Coach Mac told us this might be it for a little while, I think we all looked at each other and it hit us on the bus when she told us. I think it did help us to push even more than we were.”

Hoeft was one of five seniors who missed their chance to win a region championship and possibly more. Hoeft, who hit .385 with 10 RBIs and 18 runs scored during the abbreviated season, signed with Coahoma Community College in April.

Among the other seniors, Logan Hardin hit .417 with nine RBIs, Kallie Page had a .292 average with seven RBIs, Brooke Comans was at .280 with 12 runs scored, and pitcher Bri Daughtry was averaging nearly one strikeout per inning.

They all had great seasons, but Hoeft said it was still hard to stomach the loss of the season.

“I think it put it more into real life. I still had a little bit of hope that maybe we’ll really get back on the field and back in the classrooms and stuff. But whenever it came out that no, we’re not, it got me,” Hoeft said. “It’s all of it. All of it’s been taken away. Everything we’ve worked for since kindergarten is gone. We don’t get the last prom. It’s just crazy.”

Warren Central will have plenty of good, young talent returning. Junior Mason Smith finished with a .714 average, and three other returning players were over .400. The challenge to duplicating this 2020 start will come from waiting to pick up where they left off.

In canceling the 2020 season, the MHSAA halted all practices and offseason workouts until at least June 1. The MHSAA also eliminated slow-pitch softball as a sanctioned sport, and many coaches used that season as a fall practice period for fast-pitch. There could still be a brief summer schedule if the COVID-19 pandemic abates in the coming weeks, but it’s just as possible that Mississippi’s high school softball teams will not have an organized practice or game for nearly a full calendar year.

How well the Lady Vikes play in 2021, McGivney said, will depend on how long the shutdown lasts during 2020.

“It’ll depend on how long this goes on,” she said. “Obviously, when you have to take this much time off it’s never good. The longer the wait, the worse it’ll be.”