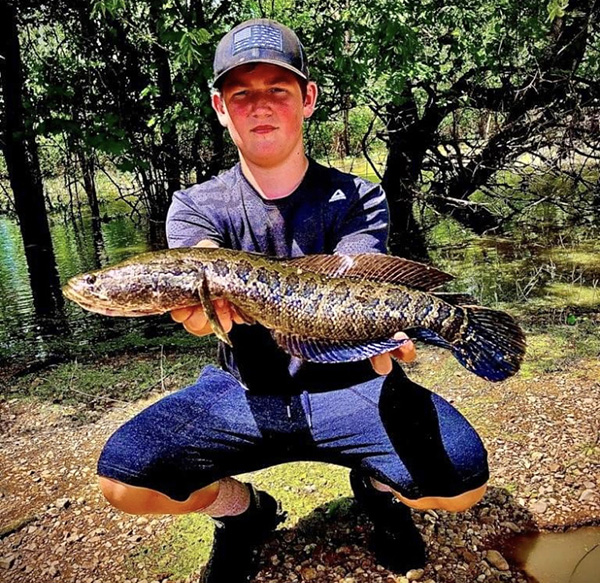 Vicksburg resident Eli Chapman, 14, shows off the northern snakehead he caught while bowfishing in Steele Bayou recently. The snakehead is rare in Mississippi, but is classified as a non-native invasive species whose live transport is illegal. (Submitted to The Vicksburg Post)

Brothers Eli and Bryce Chapman were out fishing in Warren County, like they do almost every day, when they were alarmed by something slithering through the water near them.

“I was like what is that thing swimming in the water? We thought it was a snake,” Eli said.

Actually, it turned out to be a snakehead — a northern snakehead, to be precise —which is an unwelcome sight in Mississippi’s waters.

The northern snakehead is often called a “Frankenfish” for its disturbing appearance, sharp teeth and ability to survive on land. It can spread from one body of water to another by walking short distances on land. It has no natural predators and is considered an invasive species.

Several cheesy horror movies have been made about the snakehead, but the real threat comes from their potential to destroy the ecosystems of lakes, ponds and rivers wherever they’re introduced.

Snakeheads are native to Asia. They were first found in the United States in Maryland in 2002, and in Mississippi in 2017. Small populations have been reported in 14 states. An accident at a commercial fish farm in Arkansas in 2008 released snakeheads into the waterways there, and they made their way across the Mississippi River during floods in the ensuing decade.

The snakehead the Chapman brothers caught is the first reported in Warren County, according to the Mississippi Department of Wildlife, Fisheries and Parks, and marks the farthest south they have been officially reported.

The Chapmans’ snakehead encounter occurred in Steele Bayou, a couple hundred yards below the Steele Bayou Control Structure, late on the morning of May 2. Signs in the area warn anglers to be on the lookout for snakeheads, but this was the first one the brothers had actually seen.

“We were bowfishing in about knee deep of water. He came up, and I thought it looked weird, and (Eli) shot him right through the head,” 17-year-old Bryce Chapman said. “I knew they could be in the area, and thought it would be really cool if we found one. But mainly we were fishing for gar and bowfin. That was a surprise.”

Bryce said he wasn’t nervous about seeing the odd creature when it swam near. Snakeheads can grow to be nearly 3 feet long. This one was a little less than 2 feet, and weighed about four pounds. It was far from the biggest aquatic critter Bryce has tangled with lately.

“The other day I caught a 50-pound alligator snapping turtle, so I wasn’t nervous with a fish. Some of my friends were scared of it. They said it’ll attack you, it has a reputation for attacking people. I don’t know if that’s true. They’re really cool. They’ve got some big teeth,” Bryce said.

Eli, the younger of the two brothers at 14 years old, quickly speared the fish with his bow and arrow, but it didn’t die right away. True to its terrifying reputation, it remained alive for a few minutes on land before the Chapmans did their civic duty by finishing it off and reporting it to the MDWFP.

Because snakeheads are a non-native invasive species, fishermen are encouraged to kill them immediately, photograph them, and report the sighting. Transporting a live snakehead is illegal. To report a snakehead catch, call the MDWFP at 601-432-2200.

“We shot it in the head, set it down, and it was still walking so we smashed its head,” Bryce said.

The Chapmans didn’t let the fish go to waste, however. Thanks to some You Tube videos they found a good recipe and turned the unique specimen into dinner. Snakeheads are actually considered a food fish in their native Asia.

“I thought it was pretty cool. I freaked out and was like, ‘Oh, it’s a snakehead!’ Then we took a picture, killed it immediately, and took it home and ate it. It was actually really good. We fried it up with garlic and butter. We used jalapenos, onions, cilantro, bell peppers,” Bryce said. “I was watching You Tube videos where people eat them, so I think they’re edible. The meat is white and fluffy. It reminds me of bass meat.”

The boys’ mother laughed and said she approved of the catch of the day.

Vicksburg native Norman Joseph has been hired as the offensive coordinator for the football team at Catholic High School in... read more