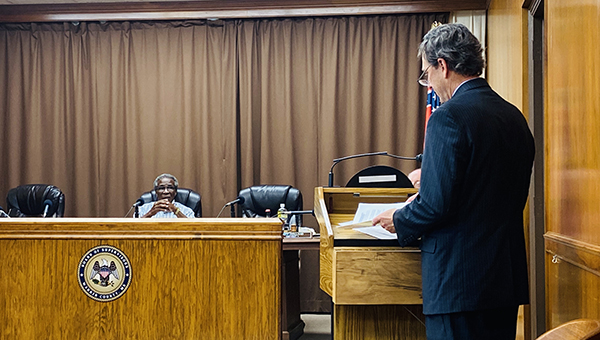 Warren County Blake Teller presents a change to the county's COVID-19 restrictions Monday during an emergency meeting of the Warren County Board of Supervisors. The changes allowed salons, barbershops and gyms within the county to reopen immediately. District 2 Supervisor William Banks, pictured, cast the lone no vote to the motion. (Tim Reeves/The Vicksburg Post)

Following Gov. Tate Reeves’ announcement last week that the state would be easing restrictions on salons, barbershops and gyms beginning Monday, the Warren County Board of Supervisors followed suit.

In a vote Monday during an emergency meeting, supervisors amended their order, allowing those businesses to open immediately following the strict hygiene and social distancing guidelines outlined by the governor last week.

Those businesses were among the many operations shut down in March in response to the spread of the COVID-19 virus. Mayor George Flaggs Jr. announced Friday, following Reeves’ announcement, that those operations within the city limits would be allowed to reopen beginning Tuesday.

District 2 Supervisor William Banks was the lone no vote during Monday’s emergency meeting. During the meeting, Banks did not give a reason for his vote.