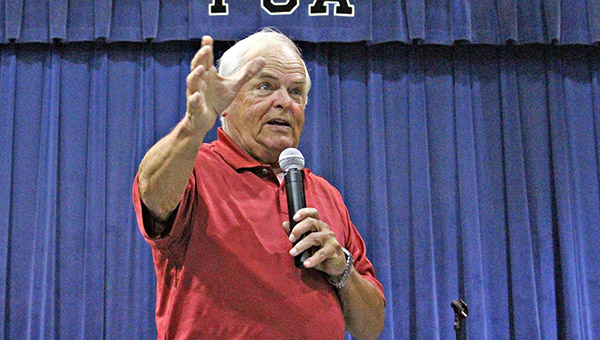 Former Mississippi State baseball coach Ron Polk speaks to the crowd at a fundraiser for Porters Chapel Academy in 2017. Mississippi State announced Wednesday that Polk has been hired as a special assistant to the athletic director. (File/The Vicksburg Post)

STARKVILLE — Mississippi State has welcomed one of its biggest sports legends back into the fold.

Ron Polk, who led Mississippi State’s baseball team to five College World Series appearances in 29 years as head coach, will return to the university as special assistant to the athletic director, it was announced Wednesday.

Polk will continue to spend his summers coaching in the Cape Cod summer league as an assistant coach, after volunteering with MSU Athletics during the school year.

“Mississippi State is a special place, and this is home for me,” Polk said in a statement. “After 54 years of coaching college baseball, including the last 12 as a volunteer assistant at UAB, this is a perfect time for me to give back to Mississippi State.”

Polk’s duties in his new role with Mississippi State were not specified, but he indicated in a statement that they will include promoting Mississippi State’s athletic department and advising coaches and officials in a variety of capacities.

“I’m very appreciative to this great university and Director of Athletics John Cohen for allowing me to do this,” Polk said. “From meeting with and being available to our coaches in different capacities, to development, alumni speaking events, serving on committees, or occasional radio and television broadcasts, I can’t wait to promote and assist in any way I can to help the Bulldogs continue to be one of the best athletic programs in the country.”

A two-time National Coach of the Year and four-time SEC Coach of the Year, Polk spent 29 seasons leading the Mississippi State baseball program (1976-1997, 2002-2008). He currently ranks ninth all-time in NCAA Division I career victories. Polk concluded his 35-year career as a head coach with a record of 1,373-700-2 (.662) and produced 35 All-Americans and more than 75 All-SEC performers.

In July 2009, Polk was inducted into the College Baseball Hall of Fame. He is also a member of the American Baseball Coaches Association (ABCA) Hall of Fame.

“This is a great day for the Hail State Family to welcome Ron Polk back home,” Mississippi State director of athletics John Cohen said. “His experience, institutional knowledge, passion for Mississippi State and the high level of respect he holds around college athletics will be a tremendous resource to our coaches, student-athletes and entire athletics program.”