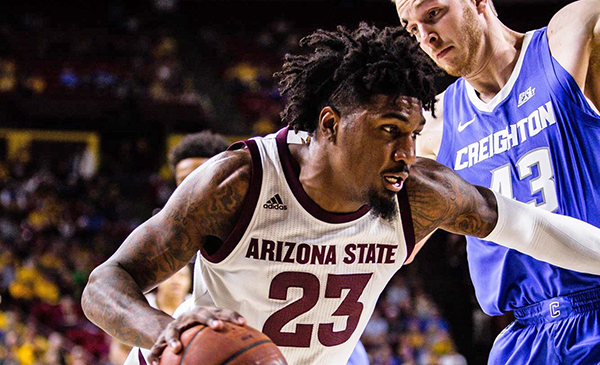 OXFORD — The Ole Miss men’s basketball team added another one of the nation’s top graduate transfers to its 2020-21 roster with the signing of Romello White, head coach Kermit Davis announced Friday.

White, a 6-foot-8 forward ranked as the No. 2 graduate transfer according to ESPN, recorded 10.2 points and 8.8 rebounds per game for Arizona State last season. He will be eligible to play for Ole Miss immediately.

“Romello is a very accomplished player that impacted winning at a high level at Arizona State,” Davis said. “He finished second in the Pac-12 in rebounding last year and became one of the all-time shooters in conference history in terms of field goal percentage. Romello is extremely tough, fits very well in our system of play, and we can’t wait to get started this summer. He has such a high ceiling in front of him that can impact the SEC in a great way.”

Over three seasons at Arizona State, White started 92 of the 95 games he played. He scored 927 points during his ASU career, averaging 9.8 per game and shooting 60.5 percent from the floor. His shooting percentage is the second-best mark in ASU history.

White also brought down 7.0 rebounds per game, leading the team in offensive rebounds in each of his three seasons. He has 16 career double-doubles.

During the 2019-20 campaign, White ranked second in the Pac-12 with 8.8 rebounds per game. The Atlanta, Georgia, native averaged 10.2 ppg, shot 56.9 percent, and produced eight double-doubles. Defensively, he totaled a team-high 35 blocks. His shooting percentage ranked sixth in the Pac-12.

As a redshirt freshman, White played under the guidance of current Ole Miss assistant coach Levi Watkins. White starting all 31 games that season and the Sun Devils made the 2018 NCAA Tournament while climbing as high as No. 3 in the Associated Press poll.

Signing with Arizona State from Wheeler High School just outside Atlanta, White was the ranked the No. 77 player in the country according to ESPN’s recruiting rankings.

White is the second graduate transfer to join the Rebels for the 2020-21 campaign alongside Dimencio Vaughn, who earned First Team All-MAAC accolades twice during his career at Rider.

Joiner, an Oxford native who led the WAC in scoring (18.6 ppg) during the 2018-19 campaign, is eligible to play this season after sitting out the 2019-20 season following his transfer from Cal State Bakersfield.

A top 100 recruit who reclassified to the 2020 class, Robinson redshirted his first year on campus and will use his 6-foot-11 frame to add size in the post.

Murrell, the No. 38 recruit in the country — the highest ranked recruit in school history — will be an incoming freshman after spending his high school senior season at IMG Academy.

Allen, meanwhile, will have to sit out a season after transferring from Samford, where he averaged 12.0 points per game over the past two seasons.

How does a swim team work out and build team chemistry when it can’t swim? Cooking contests, online meetings and... read more