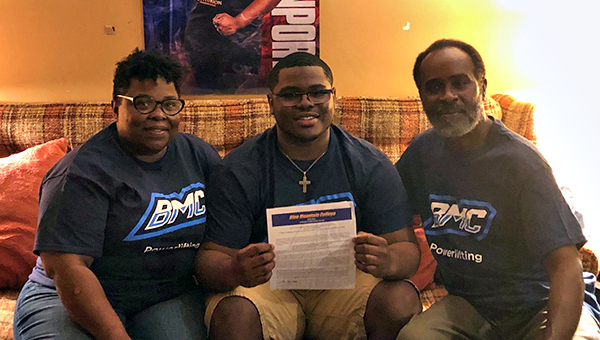 Warren Central senior Jalen Davenport shows off his letter of intent to compete for Blue Mountain College’s powerlifting team. Seated next to him are his parents Johnnie and Andrew Davenport. (Submitted to The Vicksburg Post)

A couple of months ago, Jalen Davenport was minding his own business, lifting weights during practice with Warren Central’s powerlifting team, when he got an unexpected visitor.

He’d never met Nathan Gaillard, but the Blue Mountain College powerlifting coach was there with an offer Davenport couldn’t refuse.

“He just came up to me and offered me a scholarship while I was lifting,” Davenport said. “He was waiting on me to go to state, and then the corona and all that happened and we didn’t get to do that so he went ahead and offered me the scholarship.”

Davenport accepted, and just like that earned a place in history as Warren Central’s first college signee in powerlifting. The 242-pound senior signed with Blue Mountain over the weekend and will compete for them beginning in the fall.

Blue Mountain is an NAIA school located about 40 miles northwest of Tupelo. Powerlifting is a club sport at the school, and the program is heading into its second season.

“It feels good. I think I’m the first person at Warren Central to ever get a powerlifting scholarship, so that’s also a good feeling. Thanks to (Warren central coach Chad) McMullin for always pushing me,” Davenport said.

Davenport is one of Mississippi’s top powerlifters. He finished second in the 275-pound weight class at the 2019 Class 6A state meet, and was second at the 2020 North State meet in the 242-pound division.

Davenport also played football for Warren Central and totaled 39 tackles — including 10 for loss and three sacks — during his senior season in 2019.

Football scholarships are far more plentiful than those for powerlifting, but Davenport did not receive any and said some injuries left him with no real desire to play football next season anyway. Powerlifting is his real passion, but most schools don’t offer it on a competitive level. Having an offer to pursue it in college was a dream come true, he said.

“I’m very happy. This scholarship is just like a football player getting a scholarship to play football. They’re doing what they love and doing it with the people that they love. It’s going to be the same way with this powerlifting thing for me,” Davenport said.

Davenport said he signed with Blue Mountain sight unseen. Because of the COVID-19 pandemic — which also forced the MHSAA to cancel the 2020 state meet — he has not yet visited the school. The scholarship offer that came out of the blue, however, led him to put his trust in Blue Mountain.

“It was the scholarship. And I like lifting weights, so that was the only school that was looking at me for weightlifting. That was a deal that played out perfect, in my position at least,” Davenport said. “The school got closed down before I could go up and visit. I’m not really the person to get nervous when I’m beginning something new. But this is college and this is a different situation, so I don’t know yet.”

DARLINGTON, S.C. (AP) — This was a 400-mile drive unlike any other in modern day NASCAR. The grandstands were completely... read more