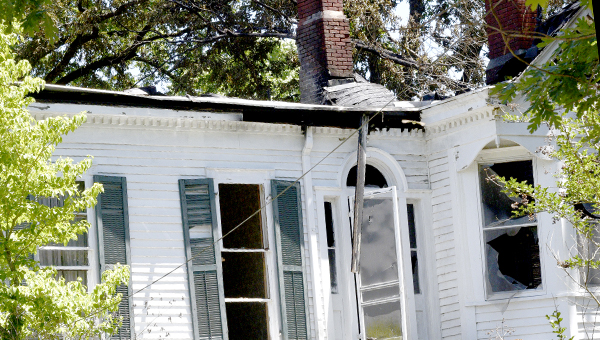 A home on Drummond Avenue was gutted by a massive fire Sunday afternoon. The home, located at the corner of Drummond and Finney streets, was built in 1901. (Courtland Wells/The Vicksburg Post)

Investigators with the Vicksburg Fire Department and the Mississippi Fire Marshal’s office believe now an electrical failure led to the destructive fire that devastated a historic home on Drummond Street Sunday.

Danczyk said the investigation by inspections in combination with witness statements lead officials to believe an electrical failure, likely in the attic of the home, caused the fire that all but destroyed.

At around 5 p.m. units were dispatched to the home. When they arrived, the back of the home, which is located at the corner of Drummond and Finney streets, was already fully involved, and the home’s roof was also on fire.

Responding units began immediately working to get the raging fire under control, while at the same time protecting nearby homes from suffering heat and fire damage.

After more than an hour, firefighters with the department had gained control of the blaze and were working to douse any remaining hot spots.

One person was in the home at the time of the fire but was able to get out safely. One firefighter required medical attention during the fight, but Danczyk said after an IV and observations by EMTs, the firefighter was able to finish his shift.

Danczyk said Battalion 1, Platform 1, Ladder 3, Engine 6, Engine 7, Engine 8, Rescue and Ambulance 40 were among the units joining him in responding to Sunday’s blaze.

According to information provided by Nancy Bell, executive director with the Vicksburg Foundation for Historic Preservation, the home was built in 1901 by Pat and Lily Henry but was originally located on another lot on Drummond Street before being moved to its current location in 1909.

Pat Henry was an attorney, district attorney and judge and in 1900 represented District 3 in the Mississippi House of Representatives.

At the time it was moved, the home had been sold to the Kuhn Estate. To be moved, the home — in July 1909 — had to be sawn in half and then reassembled. Costello Contractors were contracted to move the home.

In 1911, A.P. Underwood, the secretary and manager of the Mississippi Manufacturing Company lived in the home, which was presumably rental property owned by the Kuhn Estate.

In 1914, David Bock and his wife Rose lived in the house. Bock was the president of the Bock-Fischel Dry Goods Company.

Dr. George M. Street and his wife, Lois, lived there from about 1924 to the 1940s. Street was the director of the Vicksburg Sanatorium. In the 1940s, Dr. Donald Hall and his family next called the house home reportedly until 2000.

Summer McGee was formally charged with first-degree murder in Vicksburg Municipal Court Monday in connection to the Friday murder of... read more