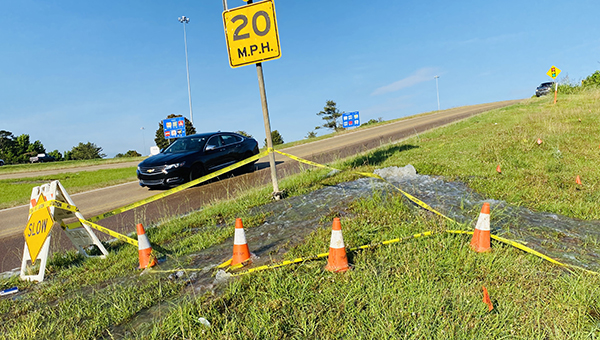 “We’ve got it back up and running,” said water and gas superintendent Dane Lovell. He said no boil water notice was required.

He said businesses in the Pemberton Square Boulevard area had low pressure but not enough of a drop to require issuing a boil water notice. He said a small area along North Frontage Road was briefly without service.

“We have flushed it well,” he said. “Everything’s on.”

The leak was reported Thursday.

Crews with the city’s water and gas department worked to isolate the area that had grown from a leak to a near break in the time since it was first reported.

Before officials with the department located the valves in the area to shut off the water in order for crews to determine what happened and what repairs are needed.

The problem caused water flow issues to residents and businesses in a large section of the city near the North Frontage and Halls Ferry Road areas.

Chick-fil-A of Vicksburg owner and operator Nick Jones said his restaurant, located on Halls Ferry Road just blocks away from the damaged water line, noticed a lack of water pressure at around 10:30 p.m. Thursday and reported the issue to the water and gas department.

He said personnel from the department told him an hour later that they had discovered where the problem was but would not be able to do anything about it until Friday morning.

As of 10 a.m. Friday, water service had not been restored, forcing Jones to keep his restaurant closed.

The recent trend of declining active COVID-19 cases in Warren County continued Thursday with the latest report released by the... read more