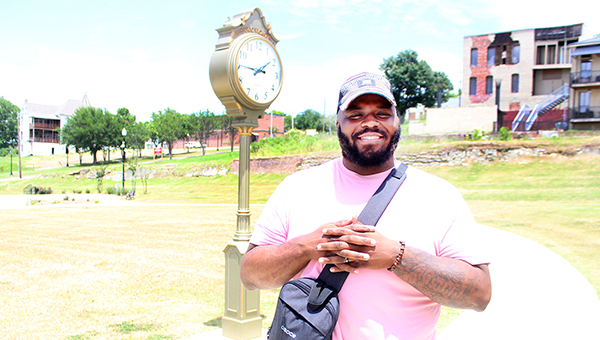 Mike Bunch is one of the organizers for Friday's protest that will start at the Vicksburg Police Department and end at Washington Street Park. (Tim Reeves/The Vicksburg Post)

A large turnout is expected Friday for a march to protest the death of George Floyd. The protest starts at 3 p.m. at the Vicksburg Police Department on Veto Street and ends at Washington Street Park.

On May 25, Floyd died after being arrested by police in Minneapolis. One officer, who pinned Floyd’s neck to the ground for over eight minutes, has been charged with third-degree murder and manslaughter in connection with his death.

The events surrounding his death have been the topic of demonstrations in several states.

“There’s social injustice going on across this nation, and I just felt, seeing protests going on in other cities and the movement going on, I felt compelled that it’s only right that Mississippi has a voice also against social injustice,” said Mike Bunch, one of the march’s organizers with the group March for George Floyd Vicksburg.

“I felt it in my heart that we’ve got to do the right thing; that somebody needs to be held accountable for their actions,” he said.

He said plans for the march began with a post he put on Facebook and other people contacted him about the event. From there, he said, a small team was formed to plan the march. The group now has 1,700 members.

“We wanted to have the proper knowledge of how to do this instead of just going in not knowing, so we got the city involved, the police department involved to keep things peaceful,” Bunch said.

“That’s our main aim; a peaceful demonstration. We don’t need all the rioting, the tearing down our city. We’re a small city, so we want to keep what we have.”

Bunch said Mayor George Flaggs Jr. and Police Chief Milton Moore were very cooperative. “They laid out the red carpet for us,” he said, saying the mayor agreed to provide a public address system and barricades to help keep people safe.

Flaggs, he said, told them, “I’m in it with you; I’m in the room with you guys. I’m all about doing the right thing.”

“We want to work with the city instead of going out and doing what we want to do,” Bunch said. “If you have someone who knows the city, who knows how to plan it, what a better way.”

Flaggs announced the march at Monday’s meeting of the Board of Mayor and Aldermen. He said he and Moore met with the group before the board meeting.

“I have no intention of denying anybody their constitutional right, and to that extent, I told them I would march with them and I would be one of the speakers and they asked that Chief Moore would speak on how he handles this police department,” he said.

“I believe this will be a successful march and peaceful, and maybe a model for others because we are cooperating with them (the organizers) and I always believe that as mayor I should be a part of whatever it is the public is concerned about in a city that I represent,” he said.

“People have a constitutional right to protest and we’re going to support them any way we can,” Moore said. “We had a very productive meeting with them (the organizers) and we’re all hoping for a peaceful march/protest.”

Besides Flaggs and Moore, Bunch said local ministers will provide prayers and one person will do spoken word.

“We want all this to be about love; we want to practice love in the state of Mississippi,” Bunch said. He hopes people participating in the march “will take away love. I know that we all believe in the same God. Once you have love in your heart; that conquers all. We need to learn to love more rather than divide each other.”

In a bit of good news and a sign that things are returning to some level of normalcy, officials the... read more