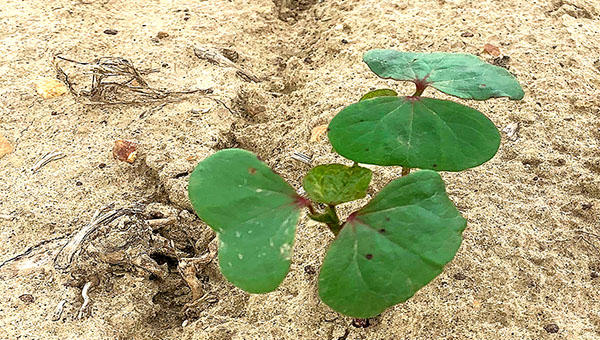 STARKVILLE — Row crop growers in Mississippi used a relatively dry May to make up for planting time lost earlier in the spring due to wet weather and soggy fields.

As of May 24, planting progress for the state’s four major row crops was slightly behind their five-year averages but ahead of where it was at that time in 2019.

Trent Irby, soybean specialist with the Mississippi State University Extension Service, said warmer and drier conditions in May prompted some growers to plant soybeans in fields originally intended for corn. The USDA projected 1.85 million acres of soybeans would be planted in Mississippi this year, but Irby said the final state acreage will likely be more than initial estimates due to early weather challenges and changing markets.

“Weather challenges from last fall through early spring kept us from completing some fieldwork ahead of planting and even getting as quick a planting start as we had hoped,” Irby said. “Conditions really went from wet to dry quickly, but even with that, we have experienced swift planting progress over the last three weeks and are seeing fewer emergence issues overall compared to the last four or five years.”

Soybean yield potential is more responsive to planting date than some other row crops, so planting delays lead to more significant yield decreases. The USDA reports that 72 percent of the state’s soybeans are currently in either good or excellent condition, with another 23 percent rated as fair.

“While we were somewhat delayed this year, especially compared to where we would like to have been, we were not nearly as delayed as last year,” Irby said.

MSU Extension rice specialist Bobby Golden said the dry May allowed rice growers to catch up “tremendously,” with the greatest majority of the crop planted by the third week of May. He estimates as much as 170,000 acres of rice will be planted.

“As of the end of the month, there are a few acres left to plant, but we are closing in on completion,” Golden said. “Harvest should not be delayed because most of the rice was still planted at the tail end of the optimum window.”

Like soybeans, nearly 75 percent of the state’s rice crop is in good or excellent condition.

“The rice crop looks really good right now with the first planted rice going to flood,” Golden said. “Much of it needed flushing to either incorporate herbicides or keep roots in adequate soil moisture. There have only been a few cases of early-season paraquat drift that has influenced rice growth and development on those acres.”

Mississippi’s corn acreage may be reduced as much as 50 percent because many growers had already abandoned corn planting intentions by late April, said Extension corn specialist Erick Larson. Growers were initially projected to plant about 710,000 acres of corn.

Corn producers were severely restricted to only a few planting days through March and April. Drier weather beginning the last week of April into May allowed more opportunities to plant, Larson said.

“However, corn is most productive when planted during March and April, so wet weather drastically reduced acreage growers intended to plant to corn in 2020,” he said.

The change in weather allowed many cotton growers to plant during the optimal May 1-10 window. Extension cotton specialist Brian Pieralisi said soil was actually too dry for some growers in south Mississippi to plant until May 20. Rain in the last week of the month helped preemergence herbicide effectiveness and stand establishment for the crop. Projected cotton acreage in the state this year is 660,000 acres.

“The cotton crop is just getting established and seems to be off to a good start. There was a cold snap in early May, which possibly caused a delay in seedling growth and vigor, but I feel optimistic the warm weather over the past few weeks mitigated those issues,” Pieralisi said. “Cotton seeded to adequate moisture has emerged quickly and appears to look good to excellent in most places around the state.”

“Newer varieties are moving toward the VIP cottons,” Pieralisi said, “so it recommended to start looking at some of these varieties for yield and agronomic performance as they will soon displace older technologies.”

A familiar and experienced face is returning to the Warren County Port Commission. Monday, the Board of Mayor and Aldermen... read more