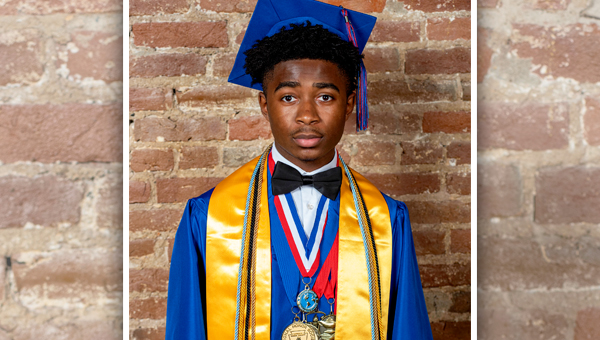 His plan was to graduate top in his class, and with hard work and dedication, Mosley reached his goal and was named valedictorian for the WCHS’s Class of 2020.

“The year before my freshman year I had a plan of what I needed to do in order to reach my goal of becoming the valedictorian,” Mosley said. “I planned to do this because I really felt like I could make my parents proud and it would push me to try my best in all my classes. Also, it is rare to see young black men like me in that position, so I felt like I could inspire others to do the same.”

Mosley is the son of Joe and Charlene Mosley and attended Dana Road and Bovina Elementary Schools, Vicksburg Intermediate, the Academy of Innovation and WCHS.

In addition to being named valedictorian, Mosley was also selected Mr. WCHS and listed in the WCHS Hall of Fame.

He was a member of the Key Club, Beta Club, Project Alpha Leadership Club, was a member of the Student Lead Team and served in leadership positions for the Warren Central student body. Mosley was also a member of the National Honor Society, Mu Alpha Theta, Madrigal Singers, G.I.V. E. (Gentlemen, Intelligence Valor Excellence) and Over 25 ACT Club.

He was an Academy Ambassador, Peer Tutor and served on the prom committee.

“First and foremost,” Mosley credited God for his successes. “He gives me the strength to be able to do all that I have done so far.”

Mosley also recognized his family for aiding in his accomplishments.

“They taught me that I should just try my best in all that I do and work smart and hard,” he said.

Like students from across the community, the Vicksburg Warren School District conducted a non-traditional graduation ceremony due to the COVID-19 pandemic.

Dressed in their caps and gowns, each graduate had an individual ceremony, which allowed for up to four friends or family members to come at assigned times.

These individual ceremonies were then videoed with graduates entering, walking across the stage and receiving their diploma.

“Not having a traditional graduation has been bittersweet, but I’m thankful that my school did the best they could in order for us to have something similar,” Mosley said. “I got to say my speech in front of my family and a few faculty, and although it wasn’t the ideal way I thought I would’ve said it, I was able to say it and others were able to hear it online, so that was better than nothing for me,” he said.

In Mosley’s valedictorian speech, he encouraged his classmates to not let their path determine their purpose because their purpose is greater than their path, and he also said, “Don’t be afraid to fail because if you never fail you are not reaching high enough to achieve your goals.”

Time spent at WCHS, Mosley said, taught him to look on the bright side.

“Life will always go on and you should make the best of it,” he said.