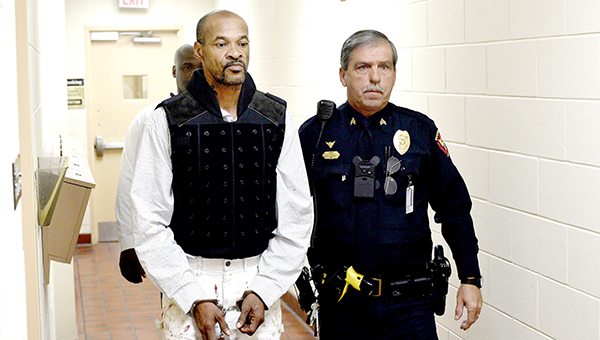 Paul Allen Steward is escorted into Municipal Court in December 2018 to be charged in the murder of his wife Kacey Latasha Miles. Steward pleaded guilty to murdering his wife Friday in Circuit Court. (Courtland Wells/The Vicksburg Post)

A Vicksburg man accused of murdering his wife in 2018 has pleaded guilty in Circuit Court to first-degree murder.

Steward was charged in the Dec. 24, 2018 death of his wife, Kacey Latasha Miles. The couple had been married for about four years. He was arrested Dec. 28 by Vicksburg police and was indicted on a charge of murder.

Kacey Steward had been reported missing Dec. 25. Her body was found by police Dec. 27 in a wooded area in Warren County.

According to reports from the Vicksburg Police Department, investigators had been questioning Steward and others in the case since his wife’s disappearance, but Steward was the only one held by police.

According to police, family and friends said the couple had been having marital issues and Steward confessed to investigators, leading them to where her body was located on property Steward’s family owns.

Area residents can expect heavy rain and gusty winds to start the week as the remnants of Tropical Storm Cristobal... read more