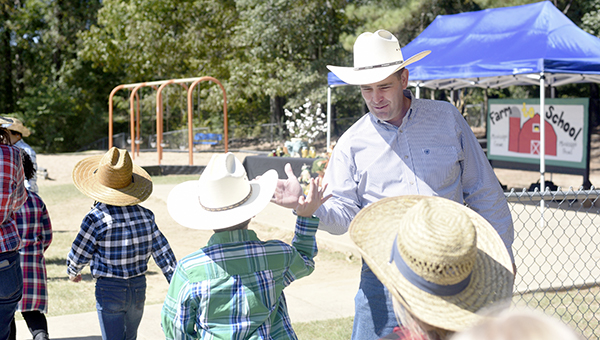 Mississippi Commission of Agriculture and Commerce Andy Gipson high-fives students as they walk outside for a program during the Farm to School event at Bowmar Elementary School in October 2018. (Courtland Wells/The Vicksburg Post)

JACKSON — Commissioner of Agriculture and Commerce Andy Gipson is encouraging the public to submit comments to the U.S. Army Corps of Engineers Vicksburg District as it prepares a supplemental environmental impact statement (SEIS) for the Yazoo Area Pump Project in the Yazoo Backwater Area.

The SEIS is in response to historical flooding that continues in the Yazoo Backwater Area. This area has experienced significant flooding nine out of the last 10 years.  Public comments can be submitted by email to YazooBackwater@usace.army.mil, and the deadline to submit comments is June 15, 2020.

“The Yazoo Backwater Area is once again experiencing a monumental flood this year. This flood event immediately follows the historic flood of 2019 that lasted approximately eight months and flooded over 550,000 acres, half of which was agricultural cropland,” Gipson said in a press release Tuesday. “The flood devasted the economy and environment in the South Delta, and most of the cropland remained unplanned.”

Substantial flooding in the Yazoo Backwater Area began again in January while the South Delta’s economy continues to suffer from the 2019 flood. Approximately 500,000 acres flooded at its peak in April. Of those acres flooded, 202,000 acres were cropland.

“The backwater floods of 2019 and 2020 are the two highest backwater flood events since the completion of the Yazoo Backwater Levee and Drainage Structures in 1978,” Gipson said. “Much of the devastation that South Delta residents are facing now could have been prevented if construction of the Yazoo Backwater Area Pump Project had been completed.”

The Yazoo Backwater Area Pump Project was designed and authorized to alleviate backwater flooding and protect the livelihood of area residents. However, the Environmental Protection Agency vetoed the project in 2008, even though it was a federally-authorized USACE Civil Works project.

The USACE and EPA are now considering a new project plan to complete the Yazoo Area Pump Project. The SEIS as described previously is one of the first steps in moving forward to complete the project.

“Nearly 100,000 acres that should have been planted in soybeans and corn are still flooded today. It’s time to stop talking about it,” Gipson said. “It’s time to finish the pumps.”

Emails in support of the pumps should be sent to YazooBackwater@usace.army.mil.

It was no surprise when Maddie Henderson learned she had earned the honor of being named valedictorian for the 2020... read more