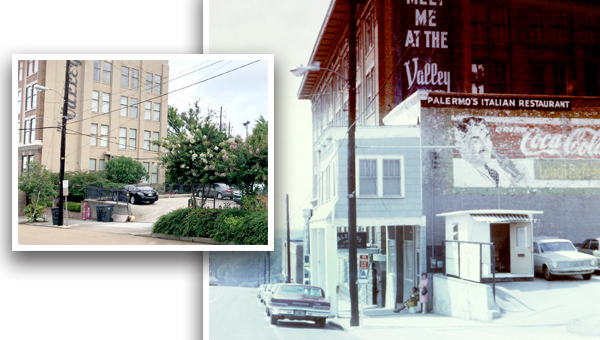 Looking back is a regular feature of The Vicksburg Post’s print edition, normally appearing in each Wednesday’s edition. The information is researched and provided by Nancy Bell with the Vicksburg Foundation for Historic Preservation.

Palermo’s Restaurant: The building at 713 South Street, behind the Valley, was originally a small two-story brick building constructed by Vincent Palermo in 1890. Palermo petitioned the mayor and aldermen to build a frame building on the lot on July 8, 1890, but this was rejected because of the fire hazard that frame construction presented. He then built a small two-story 24-by-24 brick building with a two-tiered porch across the rear elevation. In the building, Palermo operated his family’s grocery and fruit store on the first floor and they lived on the second floor. On Feb. 17, 1903, The Vicksburg Post reported that “a cistern under the rear of the two-story brick building on South Street, between Walnut and Washington, occupied by V. Palermo and family, caved in yesterday, carrying down a large section of the rear wall. Fire Chief Wilks sent an engine and crew from the Constitution house to pump the water out. The loss will reach several hundred dollars.” Apparently, this accident was an opportunity for the family to enlarge their home and business because the Ledbetter Brothers were hired to enlarge the building to 70 feet. After the Palermo’s son, Joe, married Mary Palmer on April 19, 1908, the young couple also called the building home. The Palermo family continued to operate its grocery business in the building and eventually opened Palermo’s Restaurant in the 1940s, which continued to operate into the early 1970s. The building was demolished and is a parking lot today. — Nancy Bell, Vicksburg Foundation for Historic Preservation