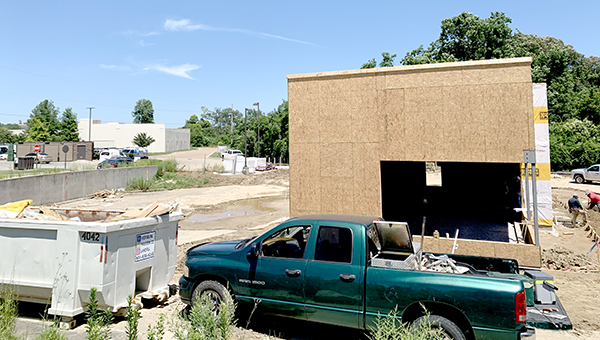 Construction is continuing on a future Starbucks location on Halls Ferry Road. Officials announced Wednesday the city had acquired the right of way to complete construction of a road between Starbucks and Chick-fil-A all the way to the Halls Ferry sports complex. (Courtland Wells/The Vicksburg Post)

The Board of Mayor and Aldermen has approved a right of way dedication to build a road off of Halls Ferry Road just south of the intersection with Pemberton Square Boulevard.

The area presently is a drive between Chik-fil-A and the old Regions Bank property, which is the site of a Starbucks Coffee that is presently under construction.

“When it goes through there, it will be a city street going right into the (Halls Ferry) sports complex,” public works director Garnet Van Norman said. He said the road will also give Fire Station 8 another outlet.

The next steps, he said, will be finding the money, hiring an engineer and designing the project.

“If we can do this road, it will allow us to relieve traffic on Halls Ferry and the relief of traffic getting to the tennis courts and the fire department,” Mayor George Flaggs Jr. said. “It’s been a long time coming but I see the structure of Starbucks going up and it will be winning situation.”