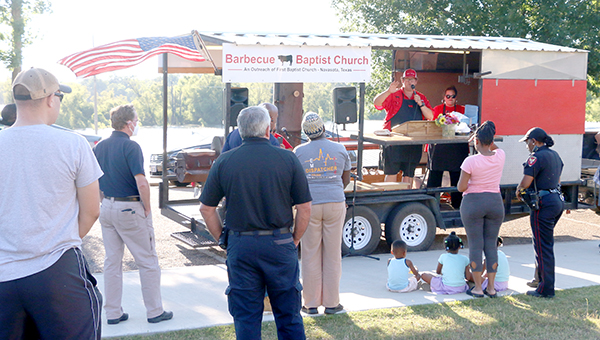 A church group from Texas made its way to Vicksburg Thursday as a part of what they call the Barbecue Baptist Church’s “seven-day, barnstorming, barbecue distributing, gospel preaching tour.”

The idea behind the week-long tour, First Baptist Church Navasota youth pastor Chad McMillan said, grew out of an outreach ministry they had been doing in their hometown of Navasota, Texas, a community located northwest of Houston.

“When the coronavirus pandemic began we saw a need for folks not being able to find toilet paper in our community,” McMillan said. “So we did a bunch of toilet paper scavenging and after finding it, we then wrapped the rolls in scripture verses and made some pneumatic guns, and we went around on a trailer and shot toilet paper out of the guns.”

As their toilet paper distribution continued, he said, the group wanted to do more.

“So we decided to put a pulpit and piano on the trailer, and we went around doing pop up worship services,” he said. “Then I joked one day that we need to have a barbecue pit on it and serve barbecue and that just grew into what we are doing now.”

The tour has included going to homes, businesses and reaching out to law enforcement and first responders.

“We do a very short worship service and then feed them a barbecue meal, distribute toilet paper and Bibles,” McMillan said.

The tour group, which is one of two that together are comprised of 23 church members representing all ages, had been doing this locally for the past two months before deciding “to take our show on the road,” McMillan said.

The group’s first stop was in Nacogdoches, Texas, early Thursday before heading to Vicksburg. After spending the night in Vicksburg, the group ended the Mississippi portion of its tour Friday in Louisville before heading to Nashville for two days.

McMillan said they’ll then head to Eureka Springs, Ark., and Avila, Mo. The group is also scheduled to make stops in Oklahoma and other parts of Texas before heading home.

Originally, the group had planned to feed the first responders at the Vicksburg Police Station, but as the numbers grew, the event was moved to a larger space at Washington Street Park.

Prior to distributing food, local first responders had the opportunity to enjoy Christian music, fellowship and a message from McMillan that began with him sharing the purpose of the group’s outreach ministry.

“The mission of the Barbecue Baptist Church is to glorify God through the Bible and brisket, prayer and pulled pork, redemption in ribs, church in chicken and salvation in sausage,” he said.