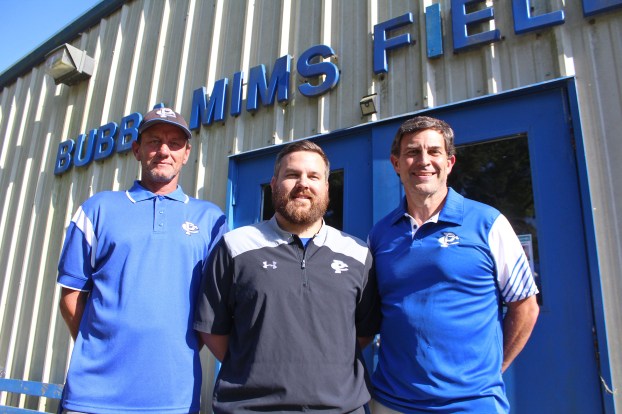 When he took on the additional job of athletic director this spring, Porter’s Chapel Academy football head coach Blake Purvis sat down and took a hard look at the school’s programs.

He was discouraged by what he saw.

His football program has not had a winning record since 2008. Baseball had some good seasons in the 2010s, but never achieved the same lofty heights as the 2000s, when it won three MAIS Class A championships. The boys’ basketball team won the Class A title in 2013 — the first in school history — and then quickly faded back into mediocrity after a couple of coaching changes.

To get things headed in the right direction, Purvis came up with a simple yet ingenious plan. Instead of separating all of the school’s teams during the offseason, what if they brought them all together into a single training program that involved all of their coaches and athletes?

“We share so many kids, and when they can see us working together, it’s not just the baseball team or the football team. It’s the athletic program. It is definitely a new approach to what has been done here,” Purvis said. “It’s not a revelation so much as a need for it. We weren’t up to the physical standards of the teams we were playing. We knew the need for accountability and consistent standards across all sports. When I thought about doing this, it was more like, ‘Can we do this?’ So far, it’s worked.”

It’s not exactly a new idea. At many high schools, especially small ones like PCA, a head coach in one sport often serves as an assistant in another. Many athletes play multiple sports.

The twist with the PCA plan is that it aims to better integrate the offseason training regimens for all of them to create better cohesion, accountability and manpower when it’s sorely needed. To keep in compliance with state regulations regarding COVID-19, players must be split into groups of about 15.

By coordinating all of the school’s coaches, including volunteer assistants, it raises the number of available staff to about six. There were times last season when Purvis ran football practice by himself.

“In years past it would have been a challenge. Some of it was dictated on the last couple of years, being limited and needing more help,” Purvis said.

At the same time, a near-wholesale turnover of the school’s coaching staff allowed for a little experimentation with a fresh approach. Longtime athletic director Wade Patrick left PCA, as did first-year baseball coach Larry Allen, and basketball coaches Colby Rushing and Cookie Johnson.

Purvis slid into the AD spot, while junior high coach Paul Ashley took over the varsity baseball program. PCA alum Walter Hallberg was hired to coach the boys’ basketball team. The job of girls’ basketball coach has not yet been filled.

It’s the first time Ashley and Hallberg have coached at the high school level, but both bring a wealth of experience from leading youth teams in their respective sports.
Ashley’s junior high baseball team had an 8-3 record in 2019 and was a perfect 6-0 this spring before the COVID-19 pandemic cut the season short.

“For the past 20 years I’ve been coaching tournament baseball. When my kids made it to seventh grade here, they asked me if I wanted to do the junior high team and it was the same kids I’d been coaching so I said sure,” Ashley said. “I’ve stepped into a gold mine with these kids I’ve had since they were 6 years old. I know all of them and what to expect out of them.”

Hallberg has coached basketball at nearly every level leading up to high school. He’ll direct both the junior high and varsity boys teams, and aims to build a program for the long haul.

“I’ve never coached high school kids before so we’ll have to see how it goes. The basketball program hasn’t been where they need to be, so you have to build it up from the junior high,” Hallberg said.

Better integrating the three major programs into one unit was a way to aid both the new coaches and Purvis, who is entering his fifth season as PCA’s football coach. Besides giving each of them a better handle on strengths, weaknesses and the progress of their respective athletes, they said it also gives them a better grasp of personalities and morale.

In the past, Ashley said, some athletes would try to play the coaches off of each other behind the scenes to get more favorable treatment. By working closely together and providing a more unified front, they can hopefully deal with disgruntled players before it becomes a major issue.

“In the past, we had kids that maybe Blake got a little hard on them and they said fine, I’m going to go play baseball. Or they didn’t like the baseball coaches so they’d quit and go play basketball,” Ashley said. “We’re all asking for the same things now. There’s no need quitting the basketball team and running off to baseball.”

Purvis said all of the coaches being on the same page is key to the new approach succeeding.

“Kids aren’t nearly as naive as people believe. If we’re not presenting a united front they’re going to see right through us,” Purvis said. “It’s different. And that’s what we need. We’re all on the same page. We all want the same things and are working to accomplish that.”

The new approach is still in its early stages, but early feedback is encouraging on a number of fronts.

At a workout last week, football, baseball and basketball players lifted weights side by side in the fieldhouse while two groups of about 10 players each were outside running conditioning drills.

Meanwhile, Purvis worked alongside Ashley, strength and conditioning coach Jason Morrison, and volunteer assistants Chris Sims and Josh Masterson to help things run smoothly. Players showed enthusiasm and drive while trying to master a new drill, and the good vibes are extending off the field as well.

Purvis and new PCA head of school Chris Williams said inquiries about enrollment have been up in recent weeks.

“We’re losing 33 seniors, but we are well on the way to replenishing what we have lost,” Williams said. “We’re seeing the beginning of something that is an answered prayer. We’re going to keep God forward in all we do and bring winning back to Porter’s Chapel Academy.”

The new approach to coaching at PCA is, indeed, part of a larger attempt to inject a shot of adrenaline into the school’s community. Williams was adamant that a successful athletic program can be a great public relations tool that in turn drives enthusiasm and enrollment for the private school.

“I believe we have a group of coaches that are going to work together for the best of Porter’s Chapel Academy. Not just one sport, but athletics as a whole,” Williams said. “You do something greater than a ballgame when you win. You boost the morale of the school itself. We’re going to glorify God with everything we do and bring the focus back to winning.”

Purvis did not shy away from the challenge. PCA only has a 9-31 record during his four seasons — it went 2-8 last season — but Purvis believes the football team and other programs are entering a new era.

“In the next two, three, four years, you better believe we’re going to play for state championships in softball, football and baseball if things continue to go the way they’ve been going for the past month,” Purvis said.

Williams, sitting among his coaches in the fieldhouse, picked up the thought.