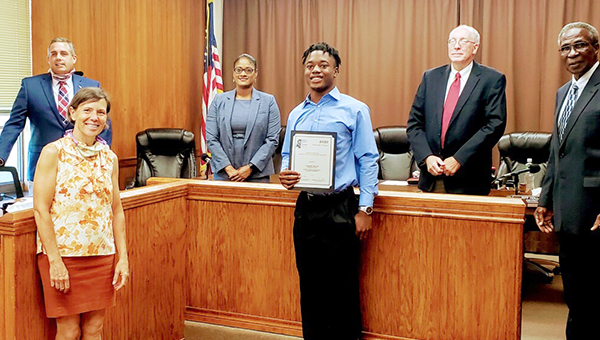 Warren Central High School senior Tyrique Willis was presented with a scholarship certificate from the Mississippi Association of Supervisors Minority Caucus during Monday's Warren County Board of Supervisors meeting. Willis was one of 14 students in the state to be presented with a scholarship certificate. He plans to attend Mississippi State University. (Submitted Photo)

The Warren County Board of Supervisors Monday voted to reject Freeport Warehouse exemptions for a number of local industries. The move is part of the board’s scrutiny recently of tax exemptions and abatements, particularly at a time when the county is faced with spending millions in matching funds to repair roads throughout the county.

“The county is in a situation where we have to scrutinize all of our financial situations because of the need to be able to have cash flow and handle the $10 million road fixes that are necessary here in our county,” Board of Supervisors President Dr. Jeff Holland said. “Until we come out from under that, we have to pay enormous attention to each of these things.”

Warren County Tax Assessor Ben Luckett said the amount of taxes that would have been abated, had supervisors approved the Freeport Warehouse exemptions, would have totaled $555,095.

According to the Mississippi Department of Revenue, “Mississippi law allows eligible warehouses, public or private, a license to operate as a free port warehouse and be exempted from all ad valorem taxes on personal property shipped out of state.”

“So you notice we went through the process of saying ‘yes’ to many of the ad valorem tax abatement related things, but for the Freeport activities, which are based on inventory activities, for at least this one year, we made the decision that we did not need to grant that— that we need to be able to keep that income to help to defray the cost of the roads,” Holland said.

Cain had previously served as the assistant road manager but was appointed as interim after the untimely death of long-time road manager Larry Flowers.

Additional matters addressed during the meeting included approving the move of the upcoming Circuit Court jury selection. The move is designed to give county and court officials more space to adhere to social distancing guidelines while selecting juries.

The runoff election to see who will face off against U.S. Rep. Bennie Thompson in November’s general election is set... read more