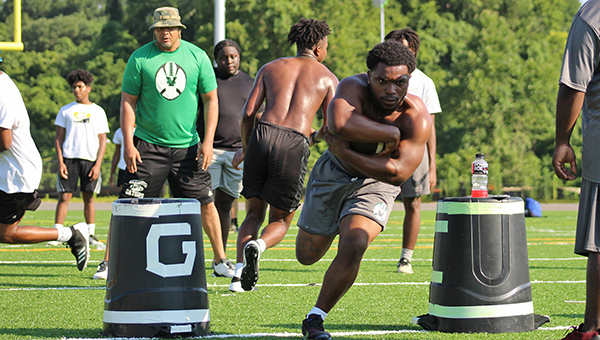 Vicksburg High running back Channing Adams carries the football during a drill at practice Monday at Memorial Stadium. It was the first day of offseason workouts for the Gators. (Ernest Bowker/The Vicksburg Post)

When the numbers came in on his first official practice as Vicksburg High’s football head coach, Todd McDaniel was very pleased by two key figures.

The first was 98.6 — the healthy temperature that all of his players had when they checked in. The second was about 85, the number of players he had on hand.

The McDaniel era began Monday morning with a two-hour workout at Memorial Stadium. The Gators mostly focused on easy drills and instruction, installed a couple of offensive plays, and got their feet under them following a three-month layoff because of the COVID-19 pandemic.

It was a gorgeous sunny morning, and a picture-perfect start to what McDaniel and the Gators hope is a successful season.

“The first day is always high-intensity, but we want to try and keep that intensity for the remainder of the year,” McDaniel said. “The kids are very enthusiastic. They’re like a sponge, just soaking it right on up. Today was a really good day. Better than most. Some of the pitfalls I was looking for, we didn’t have them, so I think we had a good first day. I’m happy about that.”

The start of offseason workouts was delayed by the pandemic — spring practice in May was also canceled — and plenty of precautions were taken to help prevent the spread of the virus. 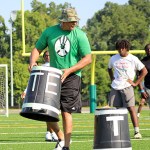 Vicksburg High football head coach Todd McDaniel moves a piece of equipment during Monday’s practice at Memorial Stadium. It was the first day of offseason workouts for the Gators. (Ernest Bowker/The Vicksburg Post)

Players were split into a half-dozen groups, mostly by position, on two different fields. Trainers occasionally sanitized the footballs that were used in various drills, and individual water jugs with players’ names lined the edges of the turf field in Memorial Stadium.

Before anyone was allowed to practice, temperatures were taken. McDaniel said everyone’s was normal.

During one water break, several players entered the junior varsity fieldhouse adjacent to the field and were quickly shooed out. Avoiding enclosed spaces is a key component of the guidelines laid out by the Mississippi High School Activities Association. When players were dismissed from practice, they immediately headed to the parking lot rather than the fieldhouse.

“All of the temperature checks were fine. My trainers were doing a good job going around and wiping everything off, trying to spray the balls down,” McDaniel said. “We’re just trying to keep everybody safe, as much as possible. That’s why we’re not coming in the building, because according to the CDC it’s hard to transmit in the heat and outside.”

According to the MHSAA guidelines, the first two weeks of summer workouts are supposed to focus on conditioning and light workouts. McDaniel’s plan for day one, however, included more light drills than running.

The head coach worked with the starting backs and receivers to teach several plays from the Wing-T offense that the Gators will use this season. His assistants worked with linebackers, receivers, defensive backs and linemen on techniques and fundamentals, with no contact and little running beyond quick sprints and bursts.

McDaniel said the approach was intended to acclimate his players to the heat and physical activity, as well as the way the new coaching regime does business.

“We wanted to get the kids acclimated back to the heat,” McDaniel said. “We didn’t do a whole lot of conditioning and things of that nature. That’s going to come in due time. You don’t want to take them too fast, because we’ve been out for three months. Until we can get our legs back up under us, then we’ll start to fly a little bit.”

Besides the introduction of the Wing-T offense, McDaniel said the biggest change he’s trying to introduce is a winning mindset. Vicksburg finished 3-8 in 2019 and has only had one winning season since 2008. McDaniel is the program’s sixth head coach in the past 10 years.

Based off Monday’s small sample size, he likes what he sees so far.

“I can see the will and the wanting to win. Being very attentive. There’s not much pointing and yelling, and things of that nature. They want to be in the right position. That’s very important,” McDaniel said. “The main aspect is changing our culture, and becoming a family instead of a group of guys on Friday nights. I can’t wait until it all comes together.”

In most years, teams practice throughout June, ease off in early July, and then ramp it up again in August. Since they had three months off already, Monday’s practice marked the start of an uninterrupted two-month sprint to the season opener for the Gators.

A preseason scrimmage is scheduled at Natchez on Aug. 14, and the season starts a week later against Madison Central in the Red Carpet Bowl. The opener, and possibly several more of the Gators’ games this season, will be played at Warren Central because of ongoing construction at their own home stadium. As of Monday, Memorial Stadium had no visitors’ bleachers or lights.

“They’re starting to stake everything off out there, so hopefully they’re about to get started,” McDaniel said of the construction work.

No matter where they play, the Gators were simply excited to get back on the field and working.

“It feels good to be back out here. I’m really just ready for the season,” senior quarterback Sha’Kori Regan said. “I feel like we’re going to go somewhere this year. He’s (McDaniel) going to take us a long way. To see everybody come out today, I like the energy we had today. We’ve got more guys, and more people we can depend on to step up to the game.”