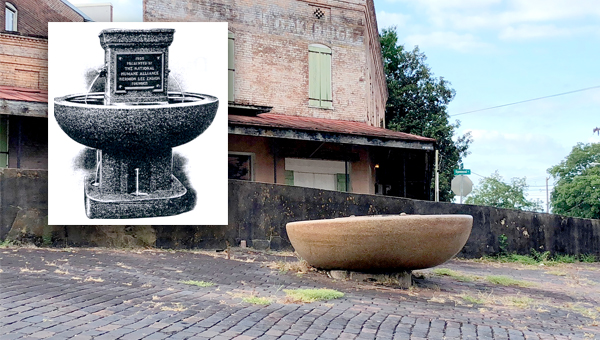 The Ensign water fountain was moved from Monroe Street to the triangle created by Openwood, Main and Locust streets, where it sits today, waiting to be restored. (Nancy Bell/Vicksburg Foundation for Historic Preservation)

The history behind a Vicksburg fountain in need of restoring

Hermon Lee Ensign was born in Carbondale, Pa., on June 30, 1849, and in the 1870s became the manager of a paper called the Alliance which, according to an article in The Vicksburg Post, was “a brilliantly written paper, a weekly journal, mildly religious and widely humanitarian. His experience in journalism he turned to practical account by later engaging in the advertising business, following it with marked success and acquiring a fortune in 20 years. He devised a new form of newspaper advertising, known as headline reading advertising. He also invented the stereotype plate with a removable base.”

The Post reported “he had an eager and imaginative temperament, an instinctive love of what is good and true and a hatred of what is wrong. From childhood, he was a lover of domestic animals. This love made him detest all that was cruel or unkind in the treatment of animals by their natural protector- Man. It became more than a sentiment — it became a passion, growing upon him and at last dominating his life. To him animals were not merely inferiors or slaves, they were companions and friends, devoting themselves to man and dependent upon him for their lives and happiness.”

Ensign founded the National Humane Alliance to carry out his ideas for the welfare of animals and he intended to give his time and fortune to this effort but died before he was able to do so. He left his estate to the Alliance and his “ideas, for humane work, educating children in kindness to animals and other similar work.”

One of the projects of the Alliance was to provide drinking fountains to be placed where people and animals could have clean water. The fountains consisted of a base, the pedestal, the bowl made of Vermont granite and weighing five tons, and the fountainhead. The bowl was to be for horses and it furnished water flowing through three spouts, passing through lion’s head gargoyles. Under the bowl were four spouts for dogs.

In 1907, Capt. Frederick B. Tilghman, the vice president of the Alliance, visited Vicksburg and offered a fountain to the city provided it would place the fountain on a suitable concrete foundation and supply the water.

The fountain arrived in Vicksburg in January 1908 and was eventually placed in the Monroe Street rose garden, south of the Louisiana Memorial, after months of deciding who would install it.

Finally, in April 1909, the city paid $117.20 for Tom Morris to install it and J. B. Smith to hook it up to the waterline. An electric light was placed on top of the fountain, donated by Col. S. S. Bullis, the president of the Vicksburg Lighting Company. At some point the fountain was moved from Monroe Street to the triangle created by Openwood, Main and Locust streets, where it sits today, waiting to be restored.

Thanks to Bill Fulcher for providing the information for this article. We are hopeful that the fountain will one day appear as it did originally. — Nancy Bell, Vicksburg Foundation for Historic Preservation.

JACKSON (AP) — Two Republicans with low-budget campaigns are in a congressional primary runoff today, with the winner set to... read more