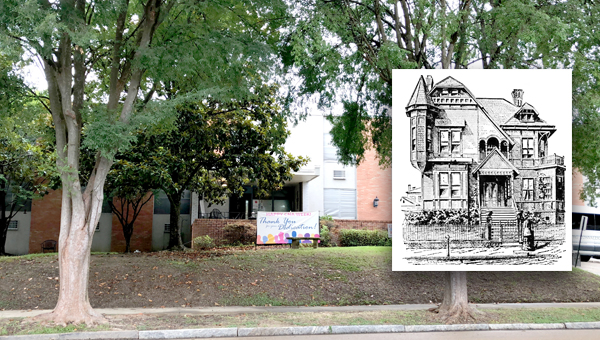 Looking Back: The history of the ‘elegant’ C.O. Willis home

C.O. Willis Home: This elaborate home was designed by William Stanton for Mary Ellen and Charles Willis and their five children and was built at 1704 Cherry St. by Curphey and Mundy.

Willis was originally from Cambridge, Md. and was a cotton factor, president of the Vicksburg Compress, a member of the Cotton Exchange, a director of Merchants National Bank and People’s Savings Bank, and on the building committee of the Opera House in 1881. Mrs. Willis was a founding member of the Women’s Exchange, among other clubs.

In June 1890, the Willises gave a children’s party that was reported in the Daily Commercial Herald. “The elegant home of Mr. and Mrs. C. O. Willis was thrown open to entertain, and little Misses Florence and Ethel Willis were the dainty hostesses of the occasion. From ‘six until 10,’ the cards of invitation read, and a happy throng of 50 or more responded. A smiling cordial greeting was extended each who entered the threshold and all were made more happy as the hours sped on. The lovely home was enticing in its mellow lights, and many fragrant flowers. A fine string band discoursed sweet music and to the strains, tiny feet tripped most gracefully, while the elfin figures swaying to and fro reminded one of Titania’s charmed midnight revels. The toilets of all were so airy and sweet that now, while we puzzle our brain to remember, a myriad of faces, both blondes and brunettes, arises to greet us all brightly smiling, and we can only think of Misses Florence and Ethel, one a rosebud in pink, the other in forget-me-not blue. After a super-abundance of all things delicious for the repast, games were indulged in and dancing resumed. All departed expressing themselves delighted with their reception and the many pleasures afforded them.”

Just two months later, Mary Ellen died while on the family’s annual summer vacation to Maryland. The papers reported that the 29-year-old had fallen ill and was operated on by a surgeon from John Hopkins Hospital and had been doing well until she died suddenly. She was buried in Cambridge.

Two of the girls, Ethel and Florence were sent to the Hollings Institute in Virginia in 1893 for their formal education.

In 1901 Ethel married Charles Crook, with the ceremony taking place in the house. The couple moved into the Cherry Street house after the wedding and lived there into the 1920s.

In 1935, the house was listed as the furnished rooms of Marie Stevens and in the 1940s through 1967 it was the Vicksburg Hospital nurse’s home. It was then torn down and the Vicksburg Convalescent Home was built.

Specialists for Stantec are in the process of preparing reports on the condition of Vicksburg’s two parking garages on Mulberry... read more