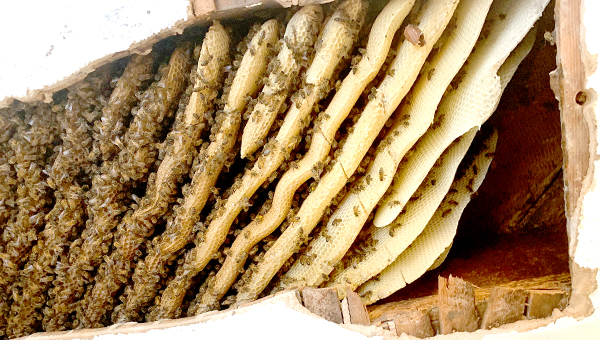 What started out as an air conditioning project turned into a bee removal for Abe and Laura Kidder, when a large beehive was discovered just above the pantry in the family's home. (Submitted photo)

It was supposed to be just a little air conditioning addition, but when electrical work began on Abe and Laura Kidder’s Chambers Street home, a surprise was found buzzing around inside the ceiling.

Thousands of honeybees had found themselves a home — and it appeared they had been there for quite a long time.

Initially, Laura said the couple thought the bees were just swarming around the outside of their home. The couple did not see a hive, so they contacted an exterminator to help.

Several attempts were made to get rid of the bees, but to no avail.

It was time to call in a beekeeper.

Finding a beekeeper was a bit of a challenge, Laura said, but after a Facebook search she found the blog “COMPANYBEE.HOME,” a site run by Vicksburg resident Crory Lawton.

“He came out with his infrared camera and found the hot spot (where the bees were located),” Laura said, adding the bees were found in the ceiling above the kitchen pantry.

Laura said they had never heard the bees, nor had her parents, who had lived in the home prior to her family moving in.

But that could have been because of the plaster ceilings, she said, which are made from a hard, dense material that can also serve as soundproofing. The house was built in 1908, and Lawton said it is not unusual to find hives hidden away in the walls of older homes.

“Yes, it is more prevalent to find bees in older homes. There are more access points for them to get in. New homes are better insulated to keep in air conditioning. Older homes were built so air could come in,” Lawton said.

After finding the location of the bees, Lawton, clothed in his beekeeper suit, punched holes in the ceiling to determine exactly how big an area the hives were in.

Once these holes were punched, Lawton said, bees started flying out, upset, obviously, that something was interfering with their home. Lawton then disturbed the bees even further when he began to saw out a portion of the ceiling.

Bees give off a pheromone when in danger to warn the rest of the hive, which is a definite smell. Lawton likened the odor to dye-marker.

“Think bank heist. They (the bees) mark you with that scent and it tells everybody else what you have done,” he said.

Once the portion of the ceiling where the bees were was removed, Lawton extracted the honeycombs and brushed the bees into large plastic boxes. There he had placed the broods, which are the eggs, larvae and pupae of honey bees. Once the bees were contained, he capped the box.

Lawton, an archeologist with the U.S. Army Corps of Engineers, said beekeeping is a hobby and raises bees in his backyard. That’s where he relocated the bees he collected at the Kidders’ home. Lawton said he has done bee extractions at other Vicksburg homes and sells honey.

After the removal of the 20 or so honeycombs that were in the Kidders’ ceiling, Lawton said he extracted around 15 to 20 pounds of honey — not counting the amount that had fallen from the ceiling when it was opened up, or what was on Lawton and the boxes he put the bees in.

Unfortunately, because an exterminator had originally been called in, Lawton said the honey had been contaminated and had to be thrown out.

“It was definitely tainted and at that point, I made the decision to discard the honey. It was awful because in all reality it probably would not have done any harm,” he said, but it was not worth taking a chance.

Lawton said had the bees not been found and removed, they would probably have expanded and built more hives. In fact, he said, it was evident they had already begun to do just that because of new combs found in the ceiling.

Fortunately, outside of having to remove a portion of the ceiling in the home, Laura said the bees had not done any damage, leaving behind only a “sticky mess.”

“Honey is just everywhere and our whole floor is sticky,” Laura said. “We just stick everywhere we go.”

JACKSON (AP) — State officials held a ceremony Wednesday to retire the former state flag and send it to a... read more