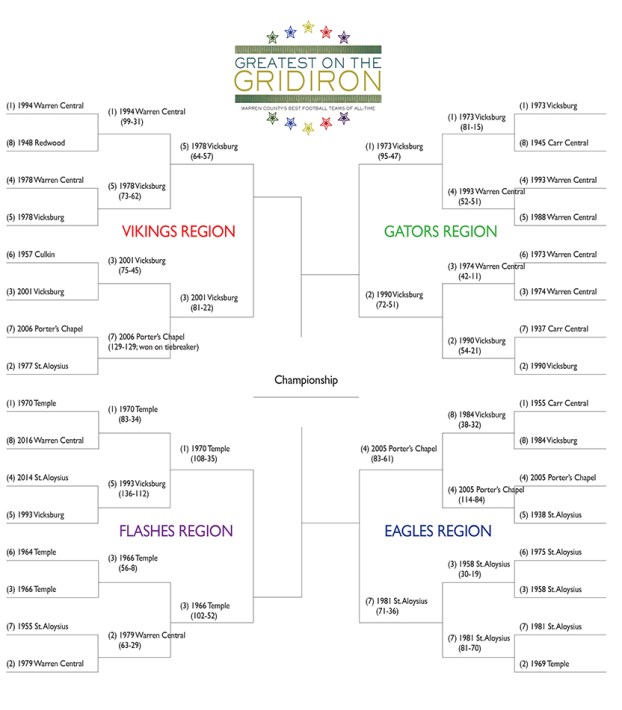 Greatest on the Gridiron tournament reaches the Elite Eight round

The second round of The Vicksburg Post’s Greatest on the Gridiron tournament saw another No. 1 seed fall and Vicksburg High take over the top half of the bracket.

Four of the eight teams remaining in the tournament to crown Warren County’s best high school football team of all-time are from VHS, and all of them reside in the Vikings and Gators regions.

The 1978 Vicksburg Gators knocked off top-seeded 1994 Warren Central, 64-57, for the closest victory among the eight second-round games. They advanced to the championship game of the Vikings Region against 2001 Vicksburg, which defeated 2006 Porter’s Chapel 81-22.

In the bottom half of the bracket, Rosa A. Temple teams from 1970 and 1966 will meet for a spot in the Final Four after both scored lopsided wins in the Flashes Region.

More than 1,000 online votes were cast in the eight second-round games, and nearly 3,000 have been cast so far in the tournament. Several games have been decided by single digits, so please visit vicksburgpost.com and make your voice heard.

Voting for the regional finals begins this weekend at vicksburgpost.com, and will remain open until noon on Thursday, July 23. You can also clip the bracket in today’s edition and mail or deliver it to our office at 1106 Washington St., Vicksburg MS 39180.

In an offseason of uncertainty, Warren County’s high school football teams have learned to employ some flexibility. It’s helping them... read more