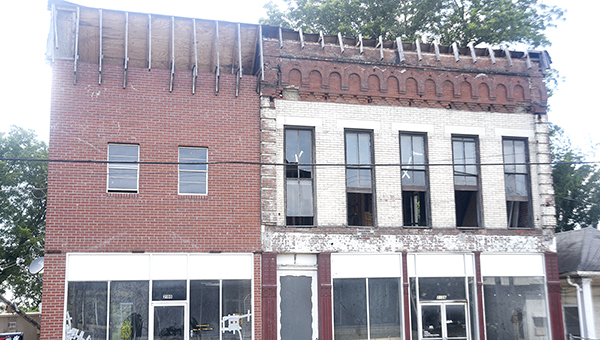 Triple M LLC has announced plans to convert the buildings at 2106 and 2108 Washington Street into apartments. (Courtland Wells/The Vicksburg Post)

A vacant 128-year-old building with a checkered past will soon be getting new life as an eight-unit apartment complex.

The Board of Mayor and Aldermen on Monday gave conditional approval for a property tax abatement that will exempt the improvements to the building, which is in the Vicksburg Historic District, from property tax for seven years.

“The building is actually three stories; there is one below the grade and there’s the main floor and one above, there’s going to be four apartments on each floor,” Jarabica said. He said the lower level will probably have a recreation room and washateria.

The building was built in 1892 by Vincent Levecchia, a wholesale and retail liquor dealer, for his liquor business and a grocery store. In 1896, he expanded the building and added a second story. He later moved his store to another building on Crawford Street and operated a saloon at the Washington Street building.

Jarabica said he heard a casino was once operated in the building’s basement.

In 1911, the building housed Vincent Cassino’s grocery, and Levecchia and Nick and John Cassino also lived there. John Cassino was later shot and killed in the store by a man who apparently hid in the store to steal merchandise at night.

In January 2011, it housed A-1 Studios, which doubled at night as a bar and was one of several establishments shut down by Vicksburg Police in a series of raids on bars for privilege license and other violations.