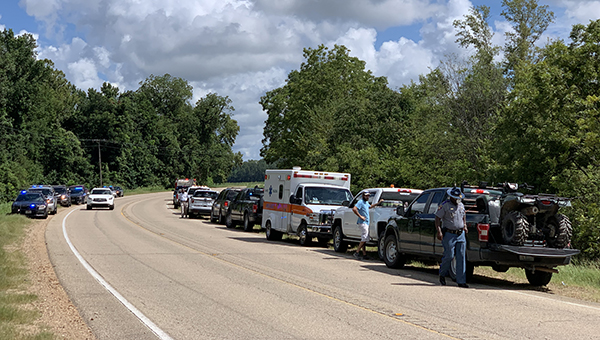 Emergency vehicles line an area of U.S. 61 North just inside Issaquena County Wednesday morning where a truck was discovered wrecked at the bottom of an embankment and a body was located in the water nearby. (Courtland Wells/The Vicksburg Post)

One fatality confirmed in accident, teams working to recover body from water

A Wednesday morning accident on U.S. 61 North just inside Issaquena County claimed the life of a Rolling Fork man.

The Mississippi Highway Patrol said early reports show that a Dodge pickup, driven by Gerald D. Vanderford, 50, of Rolling Fork, was traveling north on U.S. 61 North when for “unknown reasons” the truck left the roadway and overturned. Vanderford was reportedly ejected from the vehicle.

Vanderford was killed and his body was discovered nearby in Deer Creek.

The Mississippi Highway Patrol said the accident remains under investigation.

Multiple units from Warren County emergency departments have responded to the site of a fatal motor vehicle accident just inside Issaquena County.

The accident, which took place on U.S. 61 North involves a truck that reportedly rolled down an embankment near Deer Creek. A body was discovered in the creek near the truck. Emergency units are working now to recover the body from the water.

There is no information currently available as to when the accident might have happened or when the initial calls came in.

The Mississippi Highway Patrol is on the scene and in charge of the scene.

The Post has a reporter at the site of the wreck and will provide updates when they are available.