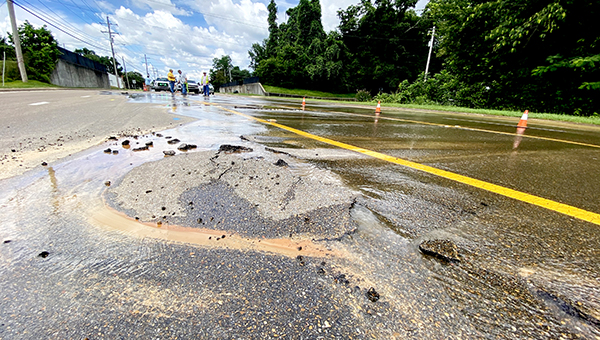 The Board of Mayor and Aldermen declared an emergency Monday to move forward with repairs to a portion of Halls Ferry Road that was damaged by a massive water leak on July 27. (Tim Reeves/The Vicksburg Post)

The Board of Mayor and Aldermen on Monday approved an emergency declaration to pay Florence-based Hemphill Construction for repairs to a damaged waterline and road repairs on a section of Halls Ferry Road.

The declaration allows the city to hire a contractor to make emergency repairs without having to go through the bid process.

Water flowing from a break in a 12-inch main waterline damaged a 400-foot section of Halls Ferry Road between Williams Road and Cain Ridge Road July 27, forcing city officials to block off the street and restrict traffic to one lane each way, with cars detoured to the outside lanes.

Water service to about 100 customers on Cain Ridge Road, Williams Road and from Halls Ferry to South Frontage Road was temporarily disconnected during the repairs.

Public Works Director Garnet Van Norman said at the time that Hemphill, which has the contract to lay the city’s auxiliary waterline, was called to make the repairs because the city’s water department was short-handed.

He said Monday the total cost of the repairs was undetermined, pending estimates to repair and repave the street.

Van Norman told the board the Halls Ferry repair is one of four waterline projects.

“We’ve got one on the South Frontage Road, one on Pemberton (Square) Boulevard and then we’ve got one we’ve got to run down Stadium Drive to the school (Vicksburg High School),” he said.

The Stadium Drive waterline replaces an older line that broke before work began on the renovations at Vicksburg High School.

“The waterline went across the football field,” he said. The new line, he said, will go from Stadium Drive to the stadium field house for fire protection.

Van Norman said the project on South Frontage Road at Porters Chapel Road involves a waterline the city had to remove several years ago so the Mississippi Department of Transportation could repair a damaged pipe that ran under Interstate 20.

The line on Pemberton Square Boulevard is north of the Car Care & Jiffy Lube.

“It goes across to Walmart,” he said, adding the pipe was affected by a mudslide.

Van Norman said the city has received estimates for the South Frontage Road and Pemberton Square Boulevard projects. The Stadium Drive project, he said, is pending permission for an easement from the Vicksburg Warren School District.

The city’s COVID-19 emergency declaration has been amended to exempt manufacturing businesses from requiring employees to wear masks on the... read more