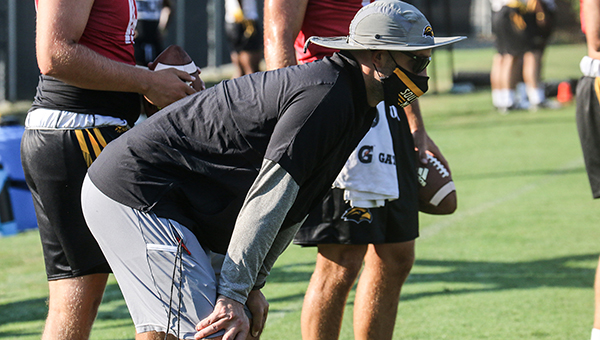 HATTIESBURG — Southern Miss became the first of Mississippi’s college football teams to return to work, when it held its first official practice of preseason camp on Wednesday morning.

The Golden Eagles, working in helmets and shorts, experienced their first “social-distanced” practice as they worked on position group fundamentals for a good portion of the practice.

It was the first practice for the Golden Eagles since January. The team did not go through spring practice due to the COVID-19 outbreak last March that forced college athletics to shut down for the remainder of the academic year.

A number of conferences have postponed or delayed their seasons. Mississippi State and Ole Miss will begin practice later this month. Alcorn State, Jackson State, Mississippi Valley State, Millsaps and Belhaven are all in conferences that postponed the season until spring.

Conference USA has not announced any alterations to its schedule, which meant it was time to get to work on Wednesday.

“As players and as coaches, they have done as good a job as could be expected,” Southern Miss head coach Jay Hopson said, on how his players have dealt with the pandemic. “We have battled through a lot of unknowns but they have done their best and worked hard. As for practice, we had good energy today. I was pleased with our first day.”

For senior quarterback Jack Abraham it was great to be back on the practice field. He threw for 3,496 yards and 19 touchdowns last season and is entering his third season as the team’s starting quarterback.

“I was just happy to be back out on the field with everybody,” Abraham said. “It’s been tough. There have been a lot of different obstacles that we have had to overcome, but I think the guys that have been here during the summer and the whole offseason have worked hard.”

Abraham said he and his teammates are taking the safety precautions that have been put in place for their protection very seriously.

“They are very necessary and we need to have them,” said Abraham regarding the safety protocols. “The guys here are taking them very seriously and for us to play a full season we are going to have to take them seriously.”

The most important games of the high school football season — and perhaps in the history of the sport —... read more