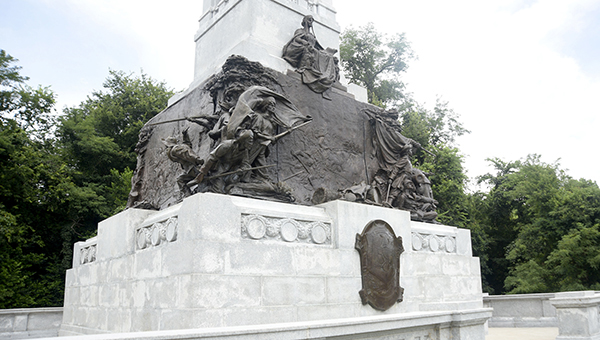 The Mississippi Memorial, located in the Vicksburg National Military Park, would be one of the monuments targeted for removal if legislation that passed the U.S. House of Representatives in July becomes law. (Courtland Wells/The Vicksburg Post)

Erected in 1909 in the Vicksburg National Military Park, the Mississippi Memorial “represents various actions of the Mississippi troops during the Siege of Vicksburg.” And, if a bill that recently passed the U.S. House of Representatives becomes law, the memorial — along with many others in the military park — could be targeted for removal.

The bill, known as “HB 7608” is titled the “Environment, Military Construction, and Veterans Affairs Appropriations Act, 2021” was sponsored by Rep. Nita M. Lovey (D-N.Y.) and contains a provision that could severely change the history documented at the Vicksburg National Military Park, as well as 21 other national parks commemorating Civil War battles.

The bill contains a section requiring the National Park Service to “remove from display all physical Confederate commemorative works, such as statues, monuments, sculptures, memorials and plaques as defined by ‘NPS, Management Policies’” within 180 days after the bill becomes law.

The bill prohibits the National Park Service from spending money to purchase or display a Confederate flag “with the exception of specific circumstances where the flags provide historical context.”

It also requires the Secretary of the Interior to present an inventory of all items with Confederate names to the House Appropriations Committee within 90 days after the bill becomes law.

The bill passed the House July 24 by a vote of 224-189 that was split mostly along party lines. Rep. Bennie Thompson (D-Miss.) — whose district includes Vicksburg — was the only member of Mississippi’s House delegation to vote for it. The bill was sent to the Senate on July 30.

By its wording, this legislation would put any image or monument that recognizes or in any way honors Confederate troops and units at any of the national parks that document the history of the Civil War in jeopardy of being removed.

According to the U.S. Congress website, the bill was forwarded to the Senate Appropriations Committee, but U.S. Sen. Cindy Hyde-Smith (R-Miss.) said she expects the Senate to introduce its own bill.

“It is too early to say how the Senate will write its own FY2021 Interior Appropriations Bill,” Hyde-Smith said, “but it will likely differ significantly from the House bill. I think it’s worth recognizing that the monument removal language in the House bill is outside the jurisdiction of the Appropriations Committee.”

She said the House inserted “this obscure provision in the back of a large appropriations package rather than amend the National Historic Preservation Act, the federal law governing how we acknowledge the people and places that define our nation’s past.

“If enacted, this provision would effectively remove the names from the headstones of thousands of soldiers and civilians who died in one of the most decisive battles in Civil War history,” Hyde-Smith added. “This is not anything I can support.”