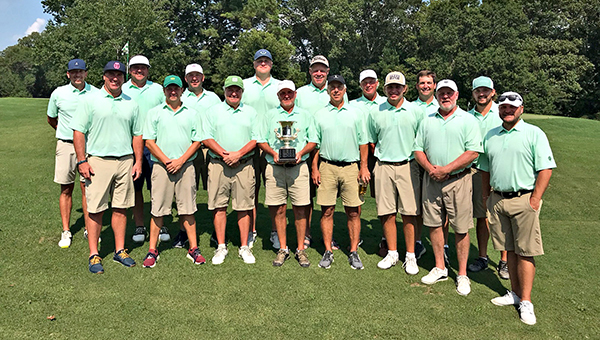 With a dominating Sunday finish, Vicksburg Country Club brought the Warren County Cup back inside the city limits.

The Country Club squad won 11 of the 17 head-to-head matches, and halved three others, to blow out Clear Creek Golf Course 22-10. The VCC reclaimed the Cup after losing it last year, and won it for the second time in three years.

The Warren County Cup is a two-day, Ryder Cup-style competition featuring the top golfers from the county’s public and private courses. Golfers played rounds of four ball and alternate shot on Saturday, and then individual match play on Sunday.

The VCC won six of eight matches in the four ball round Saturday morning. Clear Creek was able to gain back a point in the afternoon alternate shot session and trailed 9 ½ – 6 ½ heading into the match play round.

Sunday’s competition, however, was not much of a contest.

Starting in the early pairings, Jim Peay, Hunt Gilliland, Eric Richards, Mike Abendroth and Pierson Waring all won their matches by the 17th hole to give the VCC a 15-8 lead and the points necessary to clinch the Cup.

The VCC then earned at least a half-point in each of the last seven matches, winning five and halving two, to run up the score. In all, six of the VCC’s 11 victories on Sunday were over by the 16th hole.

The only Clear Creek golfers to win a match on Sunday were Jim Warren, who defeated Richie Cowart 4-and-3; and Conner Smith, who beat John Robert Ward 4-and-2.