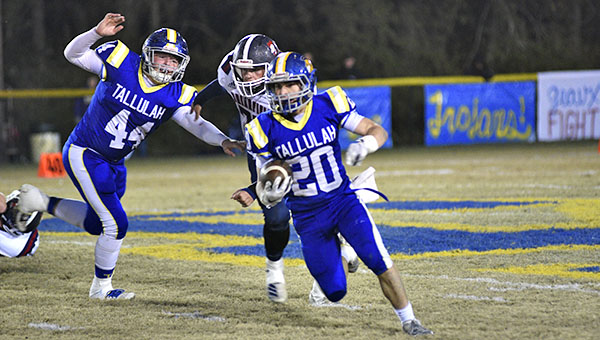 The Mid-South Association of Independent Schools is a multi-state organization with members in Mississippi, Louisiana, Arkansas and Tennessee.

In the age of COVID-19, that is causing some headaches.

Louisiana has put its public high school football season on hold. Its 13 MAIS members are still allowed to practice, but not play within the state’s borders. Because of the different regulations between the states regarding extracurricular activities and attendance, that has forced four games that were supposed to be played in Louisiana this weekend to be moved across the river to Mississippi.

Tallulah Academy coach Bart Wood said navigating the ever-changing laws of two states and finding a place to play has not been easy. His Trojans will play Union Christian Saturday at 6 p.m. at Porter’s Chapel Academy in Vicksburg.

“This is the worst thing ever. Going back and forth and making sure your insurance is OK, worrying about the wear and tear on somebody else’s field, it’s awful,” Wood said. “I’m coaching corona more than I’m coaching a football team. I don’t understand them not letting us play when we’re doing everything they asked us to do.”

Tallulah vs. Union Christian was one of four games this week that shifted locations. Defending MAIS Class 1A champion Briarfield Academy will play Claiborne Academy at Greenville Christian, while Prairie View and Riverdale will play at Adams County Christian School in Natchez. All six of those teams are from Louisiana.

Riverfield Academy was supposed to host Central Hinds on Friday, but they flipped the site of that game from Rayville, La., to CHA’s campus in Raymond.

Another game, Cathedral at Bowling Green, was canceled. Three Louisiana teams will play on the road in Mississippi as scheduled, and two others have open dates.

“We’re very thankful to Adams Christian for letting us play there,” Prairie View principal Perry Kelly said. “They were very welcoming and said it was the Christian thing to do to help us out.”

Louisiana has reported nearly 140,000 cases of COVID-19 since the pandemic began in March, and has struggled to break out of its prolonged shutdown. Its ongoing regulations have included limits on school reopenings and extracurricular activities, but as independent schools the state’s MAIS members are somewhat free to proceed — or so they thought.

Wood said a preseason jamboree two weeks ago was canceled just before it began because of a threat of heavy penalties from the state fire marshal.

“It wasn’t worth it to fight it,” Wood said.

Mississippi has reported about half as many COVID-19 cases as Louisiana. While Mississippi has implemented some restrictions, it has allowed its high schools to reopen and cautiously proceed with extracurricular activities. The MAIS football season began with a handful of games last week, and there is a full schedule this week.

Tallulah Academy has an open date next week and is scheduled to host Delta Streets Academy on Sept. 4. Wood said the site of that game could be flipped if necessary. Tallulah is scheduled to play at Claiborne Academy in Haynesville, La., on Sept. 11, and Wood was hopeful Louisiana’s restrictions would loosen by then.

“I don‘t have a home game for three weeks, and hopefully all this will be over with,” Wood said. “We’re going to play two weeks in Mississippi and move on.”

Even though they have a place to play, Tallulah Academy and Union Christian will still have to abide by Mississippi’s rules regarding attendance. An executive order issued last week by Mississippi Gov. Tate Reeves limits attendance to two fans per participant.

Wood said tickets have been issued to players and cheerleaders, and some school staff will be allowed to attend. There will be no general admission tickets sold at the gate. Even though the game is much closer to Tallulah’s campus, and will be played at Porter’s Chapel, it is actually Union Christian’s home game and it is responsible for complying with attendance regulations.

“I took them a list of football players and cheerleaders, and he gave me blue tickets with a date on it. Every player and cheerleader gets their two tickets they can give to somebody or sell, and some teachers and board members get to come,” Wood said. “(Reeves) threw a monkey wrench in it with the limiting it to two, but we got over it. We’re dealing with it.”

As for football, Tallulah is trying to climb back to the top of the MAIS eight-man football mountain after being dethroned by Briarfield last season. The Trojans finished 9-2 but lost in the semifinals and failed to reach the championship game for only the second time in six seasons.

Wood said he had to remind his players that it was a great season even if it came up just short of the program’s extremely high standards.

“It was disappointing, but we had a good season. We were 9-2, and the two teams we lost to were both state champions,” Wood said. “I was happy. The boys want to get back to the state championship. It’s a reality that you’re not going to win it every year. You have to get out there and work.”

Tallulah is not quite as deep this season as in some of its championship runs, but Wood still feels like it has an excellent chance to get back on top. Starting offensive linemen Marsh Wood, Kayne Romero, Jacob Martin and Gentry Tullos average nearly 240 pounds, while senior running backs — and twin brothers — Carter Sullivan and Walker Sullivan will keep the team’s high-powered offense humming.

“Our offensive line is all seniors. Then our two running backs are seniors. We’re weaker at some positions, but overall we might be a better team than last year with some of the kids growing up and getting bigger and stronger,” Wood said.

The Vicksburg Post welcomes your items for the Game Plan. Submit items by email to sports@vicksburgpost.com. Please include your name... read more