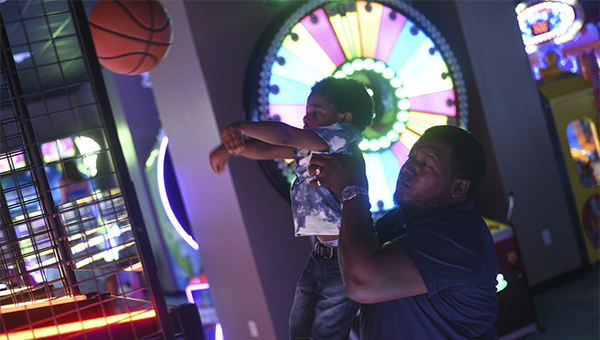 Carlos Hernandez holds up Caleb, 3, as he shoots a basketball during the grand opening of Margaritaville in June 2018. (Courtland Wells | The Vicksburg Post, file photo)

In a letter to employees Tuesday, Margaritaville Vicksburg CEO Gary Blanton announced the hotel in downtown Vicksburg would be closing effective Sunday.

The letter, obtained by The Post Wednesday evening, references “Temporary closing and furlough due to COVID-19 (Coronavirus).”

“As we continue to battle through the effects of COVID-19, we are disappointed to say that we have made the decision to close Margaritaville Hotel Vicksburg on Sunday, August 2020 at 12:00 p.m. (noon),” Blanton writes. “While we know you have worked hard to keep the property open through the summer, the continued decline in business deems it appropriate to close the property until we can further evaluate the market and the downward trends we are facing due to reduced business and leisure travel from the pandemic.”

Blanton details employees will be furloughed and will receive an additional two weeks of pay, through Sept. 5, based on “the average hours worked over the last 30 days.”

“We understand these are difficult times, and we have tried to do the right thing by keeping Margaritaville Hotel Vicksburg partially open for as long as possible; however, we are at a point where we no longer feel it is the most practical path to take,” Blanton writes.

“We’re disappointed but we hope that from this dark cloud there will be a rainbow and we’ll be able to see something happen that will be encouraging and hopeful for the meeting planners that depend on a close hotel to the convention center,” said Annette Kirklin, executive director Vicksburg Convention Center.

“We hate to hear that. We hate to hear that any business has to close, even temporarily. I hope they can reopen,” said Laura Beth Stricklin, executive director of the Vicksburg Convention and Visitors Bureau. “If they make the decision to close I hope that property won’t stay vacant for long. I think it’s a great asset to our downtown and our tourism product to have a hotel in the heart of our city.”

In May 2017, Vicksburg Hotel LLC announced the former Portofino Hotel would reopen in 2018 as Margaritaville. The hotel, which included an expansive video game area, new pool and a restaurant, along with riverfront hotel rooms, opened in June 2018.

The names on the casino and hotel changed to Horizon until fall 2010, when Tropicana Entertainment, which was part of Columbia Sussex and operated Horizon, went bankrupt and closed the casino.

Vicksburg Hotel acquired the former Grand Station Hotel and Casino property in 2014 and renamed it Portofino. The hotel closed its doors on July 21, 2015.