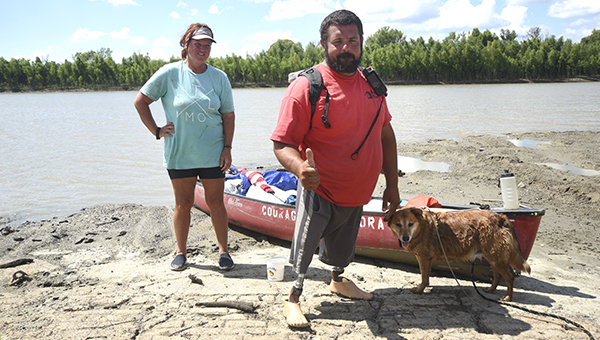 Nate Denofre and his wife, Cindy, arrive in Vicksburg Wednesday. The couple, along with their dog, have been traveling the Mississippi for more than 100 days and hope to make it to the Gulf of Mexico by the end of next week. (Courtland Wells/The Vicksburg Post)

Couple paddling Mississippi: ‘There’s so much good in the world’

It’s the challenge of a lifetime for Nate Denofre.

“I’m pretty tough, but this is pushing my limits,” Denofre, a double amputee, said as he and his wife, Christa, prepared to launch their canoe at Vicksburg’s riverfront Friday.

The Denofres stopped in Vicksburg for a two-day rest and to get supplies before continuing their 2,348-mile voyage down the Mississippi River that began in June at the river’s source at Lake Itasca in Minnesota and will end at the Gulf of Mexico.

The couple’s stop in Vicksburg, which is about 1,900 miles from Lake Itasca, marked their 101st day of the voyage.

It is a fundraiser for Courage Inc., a nonprofit organization he founded based in Michigan and Wisconsin that takes physically disabled adults and veterans on outdoor adventures all over the county.

“We take them fishing, hiking, camping,” he said. “We supply everything. It’s something they thought they could never do again due to their limitations. We set everything up — the food, the gas, the volunteers; we never charge a dime for our services.

“One weekend we might have an amputee from Vietnam, the next week a lady with cerebral palsy from Philadelphia. As long as they are over 18 and have a physical disability,” he said.

Denofre’s disability has been since birth, when he was born with amniotic band syndrome, which left him without legs below his knees. But, he has a track record of overcoming that disability.

“I’m fortunate; I’ve always worked, I played football, I was a machinist,” Denofre said. “I’ve found a way to deal with it. When you take someone with multiple sclerosis fly fishing in Michigan and they say they forgot they have MS for three days, that is rewarding and it happens quite often.”

The other goal is to inspire people with disabilities to realize they have the ability to get out and physically do things despite their situations.

Denofre said he chose to paddle the Mississippi because “it’s big, it’s hard, it’s a challenge; it’s definitely not easy. Not everyone can do it, plus in the United States, this is one of the hardest things we can do.

“I’m a double amputee. There hasn’t been an American double amputee ever to do this and I would be the first,” he said. “People see that and it gives them hope and they see that they’re not crippled. They can go bike, they can do things; they can go for a walk. It’s a different perspective.”

Denofre said the trip so far “has been everything. It’s been great; it’s been miserable, it’s been sunny, it’s been muddy, but overall it’s been a challenge and that’s why I love it.”

And the best part of this trip, he said, hasn’t been just nature, or the view, but the people.

“There’s so much good in the world. It’s unreal,” he said, adding the river angels, an organization of individuals who live along the Mississippi and provide assistance to paddlers traveling the river, have helped them along the way.

“We pull into town and we got a ride, we got resupplied,” Denofre said. “They’re all up and down the river willing to help and it’s been great, 100 percent. It’s been positive.”

Layne Logue of Vicksburg, a river angel, said the organization has a Facebook group “and we know the paddlers are coming down the river.

“We have a list of all of them. When they start coming down (the river) they’re in a canoe and not as mobile and can’t get to grocery stores or resupply gear,” Logue said. “We will resupply them, take them to stores and host them — get them to a house so they can get a good night’s sleep in air conditioning and a bed.”

Logue, who has experience paddling the Mississippi to the Gulf, gives paddlers information on dangers and good places to camp along the river and the names of other river angels along the way.

Denofre said the couple stopped in Vicksburg to resupply, meet Logue and learn the area’s history.

“We heard it was a great place to come and it really was,” he said. “We needed a couple of days off.”

The couple toured the Vicksburg National Military Park got their supplies and spent two nights in a hotel.

“You hit the 2,000-mile mark and exhaustion kind of sets in,” Christa said.

Rested and resupplied, the couple shoved off late Friday morning for the remaining 448 miles of their journey, which included a detour down the Atchafalaya River.

“We should be in the Gulf, hopefully by a week from today,” Denofre said.

Courage Inc. is a 501(c)(3) corporation. Denofre said people wishing to make a donation can go to the Courage Inc. website at www.courageincorporated.org.

Vicksburg lost one of its voices and a chronicler of its past with the death Aug. 21 of Yolande Robbins.... read more