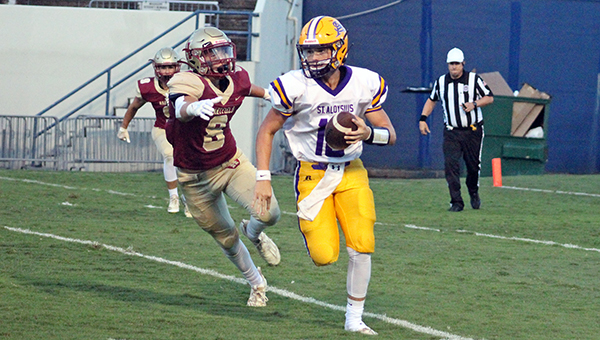 JACKSON — Everyone in Mississippi, including the St. Aloysius Flashes, was excited for Week 1 of the 2020 high school football season.

The Flashes, as usual, will probably be a lot happier once Week 2 gets here.

Xavier Davis ran for 176 yards and four touchdowns, and Hartfield Academy scored on five of its seven first-half possessions as it blitzed St. Al 43-0 Friday night at Veterans Memorial Stadium in Jackson.

The loss extended St. Al’s losing streak in season openers into a third decade. It has not won its first game of the season since 2006, a span of 14 consecutive defeats.

“There were some glimmers of hope. We were inconsistent. Sometimes we looked really good, and sometimes we didn’t. Sometimes we tackled them, and sometimes we didn’t. They’re a good football team. They’ve got good backs, a big line, they do a good job,” St. Al coach Stacy Sizemore said. “When you’re as young as we are, and also young and inexperienced, inconsistency is going to happen until they get some games under their belt. Our kids’ effort was good. They didn’t get down and we continued to fight until the end of the game.”

Despite the lopsided outcome, the game still served as a celebration of football. A crowd of several hundred mask-wearing fans spread out in the cavernous 60,000-seat Memorial Stadium in compliance with state regulations intended to slow the spread of COVID-19.

Bands played, fans cheered, and on the field players appreciated an opportunity to play football that was not always guaranteed in recent months.

“We’re all grateful that we’re able to play. We just hope we can keep going,” said St. Al quarterback Tristan Wilbanks, who completed 6 of 12 passes for 61 yards, with no touchdowns and no interceptions.

Hartfield reached the second round of the MAIS Class 5A playoffs last season, and showed the look of a championship contender again while ripping through St. Al in the 2020 opener.

Davis did all of his damage — on only nine carries — in the first half as the Hawks jumped out to a 36-0 lead at halftime. Davis scored on runs of 2 and 11 yards in the first quarter, and 47 and 64 yards in the second.

Hartfield also scored on a 13-yard TD pass from Will Elliott to Brandon Buckhaulter in the second quarter, and a 59-yard run by Reed Jesiolowksi late in the fourth quarter. In all, the Hawks totaled 298 rushing yards.

The first two touchdowns were set up by big third-down plays. Elliott scrambled out of trouble on third-and-5 on the game’s opening drive, and dumped a short pass off to Colton Bradley who rumbled 59 yards to the 2-yard line.

After a high punt snap on St. Al’s opening possession resulted in a safety, Hartfield converted two third downs on its second scoring drive. Carson Sied broke several tackles and ran for 16 yards on third-and-4, and then Davis went 11 yards for the touchdown on another third-and-4.

“Those were huge plays for us. It was just a busted assignment, where our contain guy got caught up inside doing something he shouldn’t have been doing. When you don’t do your job, that’s usually where it breaks down,” Sizemore said.

St. Al’s best chance to avoid the shutout came on the final drive of the first half. Two long passes moved the ball to the Hartfield 13 with 20 seconds left, and after scrambling out of some trouble Wilbanks appeared to throw a touchdown pass to Carter Magee in the back of the end zone.

Officials ruled that Magee had stepped out of bounds prior to catching the ball, however, and the touchdown was waved off. Wilbanks was sacked on the next play and time expired.

“They said Carter was out of bounds. I guess his heels were. It didn’t look like it, but I guess they thought it was,” Wilbanks said.