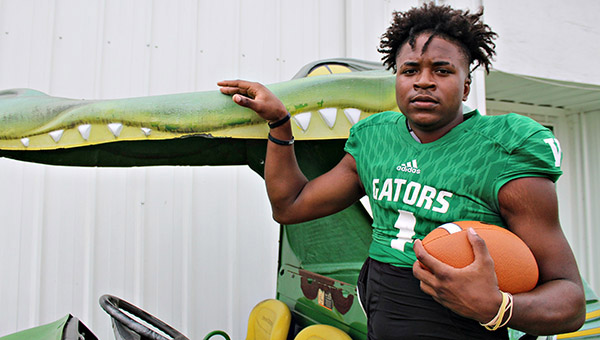 Whenever he took a snap last season, the world was a blur to Sha’Kori Regan.

Some of it was metaphorical. In his first season as Vicksburg High’s starting quarterback, he had to learn a lot and quickly adjust to the speed of the game. Much of it, though, was literal. It wasn’t that Regan couldn’t see a path to success, it was that he couldn’t see much of anything. His vision was so poor that he had trouble seeing down the field.

“I really couldn’t see the receivers. I just know them because of their body type,” he said.

Somehow, Regan was able to differentiate the blurry figures in front of him to have a solid season. He threw for 1,277 yards and 12 touchdowns — as well as 12 interceptions — for the Gators. Now he’s got a new look, a new offense to run, and a renewed sense of purpose as he enters his second season under center.

“I got glasses, and some goggles. Last year I didn’t really feel like I needed them. I didn’t want to wear them and everybody see me. I was worried what everybody would say. I’ve got that out of my head now. My mama always said, ‘It doesn’t matter what anybody says, just be you,’” Regan said.

First-year Vicksburg head coach Todd McDaniel said that’s all he’s asking Regan to be, although he is asking him to be a slightly different quarterback than in 2019.

McDaniel uses the Wing-T offense, a scheme that uses the pass mostly to keep defenses honest and exploit their tendencies. The Wing-T is a run-first offense, unlike the pass-oriented offense the Gators ran last season under former head coach Tim Hughes.

Regan threw 201 passes in 2019. During his last five seasons at Terry and Hazlehurst, McDaniel’s teams averaged 63 pass attempts per season.

“They were a spread team last year, more passing, and I’m not that,” McDaniel said. “We will throw the football, but I’m not going to ask Sha’Kori to be John Elway. I’m going to ask these guys to go out here and do the things that we know that they can do.”

Fortunately for both quarterback and coach, Regan showed he could run a little bit last season as well as throw. He carried the ball 129 times for 686 yards and eight touchdowns, and had three 100-yard games.

With more opportunities to run, and an extra year of experience under his belt, Regan feels like he can improve on those numbers.

“Last year I didn’t really break out my running game like I wanted to, because I was still trying to see the light on the field. This year is going to be my prime year,” Regan said. “This year, I don’t feel like a rookie anymore. I feel like the game is going to be slower. I’m ready to go out there and shock the world.”

Having a full season at quarterback, Regan said, is helping him as much as his new glasses. He played linebacker, wide receiver and kicker as a freshman and sophomore, but was moved to quarterback during the 2018-19 offseason. He admits the responsibility and attention that comes with the position was a little overwhelming.

Regan first showed what he’s capable of early last season against Benton (La.). He either ran or passed the ball on 21 consecutive offensive plays to rally them from a 21-point deficit in the last 9:37 of the fourth quarter. The Gators lost 49-48 in overtime, but Regan finished 15-of-28 passing for 186 yards and two touchdowns, and ran for 158 yards and three TDs.

“I was scared at first, because the quarterback has all the attention,” he said. “It was my first year and I had never played quarterback. I was always a wide receiver and they brought me to linebacker, so when they moved me to quarterback it was a lot of pressure. Everybody was looking at me and looking forward to seeing what I can do.”

Now he’ll have a different challenge in trying to master the Wing-T. Through two months of summer workouts, he feels like he’s got a good handle on it. He’s already gotten scholarship offers from Holmes Community College and Fort Scott (Kansas) Community College, in part because those teams run option or Wing-T offenses.

“I kind of like it. I really like it. It gives me a lot of attention,” Regan said. “When it first came in, I thought it was going to be hard to go through plays when I’ve already got my old plays programmed. But after a while it locked in.”

The new glasses are also helping.

“It increased my accuracy a lot. I’m dotting my receivers, I’m hitting my holes, and I’ve gotten my speed up a little bit, too. I’m going to be a dangerous weapon,” he said.

The Gators are counting on that to finally break out of a decade-long malaise. The program has only had one winning season and no playoff victories since 2008. It’s the start of a new decade, however, along with a new coach, offense and eyewear. It’s no wonder why Regan can finally see the Gators as playoff contenders.

Slow and steady wins the race, but fast and steady won a softball game for Porter’s Chapel Academy on Monday.... read more