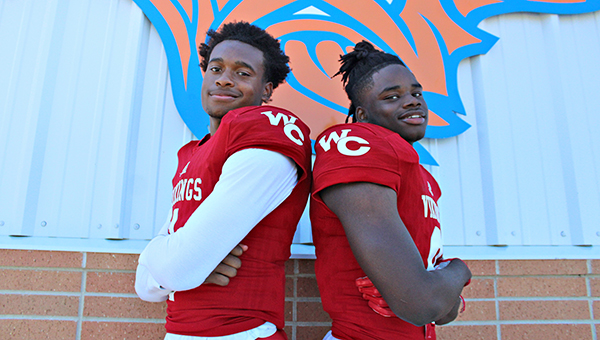 Playmakers 2020: WC cornerbacks Bell and Thompson are a formidable team

When they’re on the field, Warren Central cornerbacks Tevin Bell and Jaylin Thompson usually line up on opposite sides of the formation. They are always, however, on the same page.

The two seniors are both entering their second season as starters for Warren Central’s defense. They’ve created a friendship and a bond on and off the field, friends who work out together on the weekends and especially on Friday nights to make the Vikings’ defense the best it can be.

“We work out all the time together. Just coming out here on a Saturday or Sunday and working on our craft, and making our weaknesses our strengths,” Bell said. “It’s all about communication. Sideline, before the game, after the game. Before the game even starts, the week of we’re always talking and letting each other know what’s happening so we don’t let each other fall.”

Both players emerged as starters last season, and almost immediately made an impact. They combined for 75 tackles, were both picked to The Vicksburg Post’s All-County team, and gained a reputation for being hard workers as well as shutdown corners.

“They’re everything you want as a coach, as far as work ethic and trusting them and being great young men. On top of that, they can flat-out play. We really trust them a lot,” Morgan said. “They can give you everything you need at that position. They also do a good job blocking kicks, covering punts, and they’re just good ballplayers. You’ve got to find ways to get all you can out of guys that can do it. They’ve got a knack for it.”

Part of their success, Bell and Thompson said, comes from their teamwork. Thompson said they’re constantly comparing notes, watching film, and sharing tendencies of the receivers they go up against. There is, of course, competition among themselves, but it’s always with the bigger goal in mind.

“We try to help each other. It’s just competing and trying to make each other better,” Thompson said. “Before the game and during the game, even on the sideline, we’ll tell each other what this wide receiver does, or if he comes off the ball slow or he fixes his gloves when he’s fixing to get it, things like that.”

If there’s one thing the two cornerbacks haven’t done much of, it’s intercepting passes. Bell had one interception last season, and Thompson did not have any. In the strange world of defensive backs, that’s not a bad thing, though. If a cornerback is covering a receiver well, there probably won’t be a lot of passes thrown his way.

“Picks are not everything. You might be locking somebody up and the ball is just not there. You did a great job on defending the guy and it wasn’t there,” Bell said.
Thompson added that he wants to create turnovers, but takes more pride in seeing a receiver’s tiny stat line at the end of a game.

“If they’re coming your way, you’re going to get action. If they’re not coming your way, then (fans) just put their eyes on the linebackers. But if you watch football, you know we’re doing our job,” Thompson said. “If you end a game with zero picks, but the guy ends the game with one catch and 15 yards you did your job. We still want the picks, because that’s the money.”

Bell and Thompson also take pride in their ability to do more than cover receivers. Thompson had 40 tackles last season and Bell had 35, both respectable numbers for a cornerback. It’s even moreso since most of the tackles came in run support, rather than down the field. Thompson had two tackles for loss.

“That’s something else we take pride in, is tackling. They say DBs, or cornerbacks just like to cover. We try to take pride in actually tackling and hitting people,” Thompson said.

Having cornerbacks that can lock down receivers down the field and come up to the line to take down a running back makes the entire defense better, Morgan said. The Vikings allowed 20 points per game last season, but with seven starters returning on defense — including two experienced, physical cornerbacks — he hopes to improve on that by opening up the playbook in 2020.

Bell and Thompson also want to see the Vikings improve in the win column. The team has finished 6-6 each of the last two seasons, and part of the problem in 2019 was a tendency to let off the gas in the second half. In three of its six losses, Warren Central was ahead or within one score at halftime.

Two of those ended in double-digit margins, including a 50-24 loss to eventual Region 2-6A champion Starkville in November and a 35-6 loss to South Panola in the regular-season finale.

Against Starkville, Thompson blocked a field goal on the final play of the half and returned it 50 yards for a touchdown to give the Vikings a 17-6 lead. Then they gave up 44 points and four touchdown passes in the second half. Starkville quarterback Luke Altmeyer finished the game with 296 passing yards and five touchdowns.

Thompson cringed and nodded when the Starkville game was mentioned as an example of last year’s second-half struggles. It was clearly a game he’d rather forget, but also one he’s using as fuel to improve this season.

“We’ve got to do a better job of being a second-half team. I feel like we put a lot of energy into the first half and didn’t finish the game. There were a lot of games that slipped through our belt and we can’t do that this year,” Thompson said.

Just as much, Thompson added, he, Bell and their teammates want to cement a lasting legacy in Warren Central’s storied history. The program’s calling card under Morgan has been a stout defense, which has slipped a bit the past two seasons.

With most of the starters on defense coming back in 2020, Thompson said, it’s time to take a step forward. He and Bell are happy to lead the charge.

“We can’t be that team that lacked defense, or had all the people that came before you played good defense and you didn’t have a good defense. We try to take pride in that,” Thompson said. “Knowing the defense is winning games is something we take pride in.”

The 2020 volleyball season opener between Warren Central and Vicksburg High was a snapshot of sports in the COVID-19 era.... read more