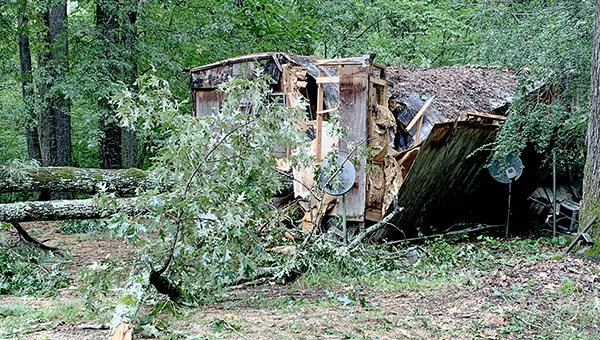 A trailer on Bradford Drive was crushed by a falling tree Thursday morning as wind and rain from Hurricane Laura blew through the county. (Terri Cowart Frazier/The Vicksburg Post)

Hurricane Laura blew past Warren County on its way north, causing minor damage to the area.

Laura came ashore on the Louisiana coast east of the Texas state line early Thursday as a Category 4 storm, causing extensive damage to Lake Charles and Cameron, La., and the surrounding area before making its way north to Shreveport, La., and Little Rock, Ark.

It was one of the strongest hurricanes ever to strike the U.S. based on its wind speed of 150 mph.

Laura was kinder to Warren County. According to information from the National Weather Service, the area had light rain from the storm and winds ranging from 10-30 mph.

“I think we made out pretty good,” said Warren County Emergency Management Director John Elfer. “We had a few trees down and that was about it. We’re very lucky.”

The most serious storm damage was a tree falling on a trailer on Bradford Drive.

Elfer remained cautious, however, saying he had some concerns about the potential for severe weather Friday when the trailing remnants of Laura pass through the area.

“We had a lot of limbs broken off trees and trees down in several places,” Warren County Sheriff Martin Pace said. “We’re doing a lot better than some places.”

“We missed a bullet on this one,” Van Norman said.

“We’ve got broken poles and trees on lines,” she said.

The largest was in the Mississippi 27/Warriors Trail area where 234 customers lost power after a tree fell on a power line. She said power was expected to be restored by 5 p.m. Thursday.

Thursday morning, 125 customers in the Warrenton Road area were without power after a tree fell on a line. Power was restored by noon.

An employee with Baker Services is thankful he was out of his truck Wednesday afternoon at the time it caught... read more