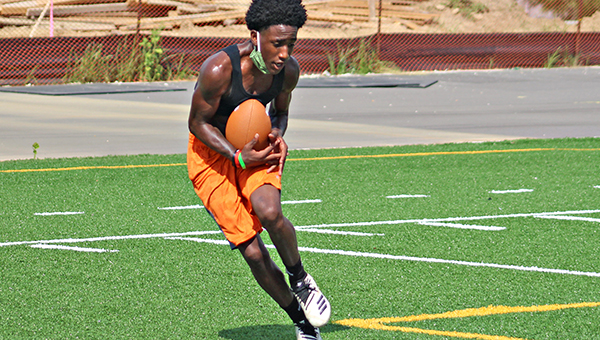 Preseason scrimmages always give football coaches their first real look at their teams, and what they need to work on. This time, it will provide a first glimpse at a whole lot more.

Besides studying the X’s and O’s, it will give both teams their first game day experience dealing with COVID-19 measures implemented by local and state officials over the course of the summer. Solving logistics issues will be just as important as figuring out a depth chart heading into Week 1.

“We practice safety first every day in practice. The only difference in the guidelines this week is we’ll have one person pouring water from disposable cups instead of individual squeeze bottles,” Vicksburg coach Todd McDaniel said. “We’ll let all the windows down on the bus and make sure we have ventilation, because you can’t social distance when you’re taking two or three buses. (Thursday) we’ll go over all the things we’re doing (Friday).”

One thing none of the four teams playing Friday will have to deal with is crowd noise. The Vicksburg Warren School District Board of Trustees voted last week to prohibit fans from attending the game, both in accordance with Mississippi’s COVID-19 guidelines and to simplify the transition between games.

Allowing fans to attend would require sanitizing the stadium between games, which would result in a lengthy delay.

The quiet atmosphere will hardly dampen anyone’s enthusiasm for playing football. Not after the season was delayed two weeks by the MHSAA following a summer spike in the state’s COVID-19 cases, spring practice was canceled altogether, and summer workouts were pushed back several weeks.

Vicksburg will take the field first, as McDaniel makes his unofficial debut as the Gators’ coach. They’ll face Hazlehurst, a team McDaniel coached during two different stints during the past 12 years. The teams will play two quarters with their varsity, with no special teams plays but regulation rules otherwise.

The scrimmage will give the Gators their first look at McDaniel’s Wing-T offense in action, after they’ve spent the past two months installing it.

“We’re getting our assignments and things down, but it’s hard going against yourself. You really need to be able to go against another color besides your own,” McDaniel said.

After Vicksburg and Hazlehurst wrap up, Warren Central will take the field against Holmes County Central for two quarters of varsity and two quarters of junior varsity action. The teams will play under regulation rules in a matchup that was supposed to be this year’s regular-season opener.

Morgan said playing a full-speed scrimmage — something the Vikings have done in their spring game for several years — helps to iron out the kinks before Week 1.

“We’ll try to get everything we can on tape. The more we can get on the board, the more we can correct. We’re trying to be as good as we can out of the gate,” Morgan said.

Morgan added that he was happy not only to see football’s return after a difficult summer, but to see how the work of the past couple of months has paid off.

“You can only coach so much,” Morgan said. “Players have to play, and they get better as they play. They get more conditioned as they play, and there’s practice speed and game speed. We need to get in that mode and make sure our guys are prepared as best as we can get them for the physicality of the sport and the knowledge of the game. There’s no substitute for playing.”