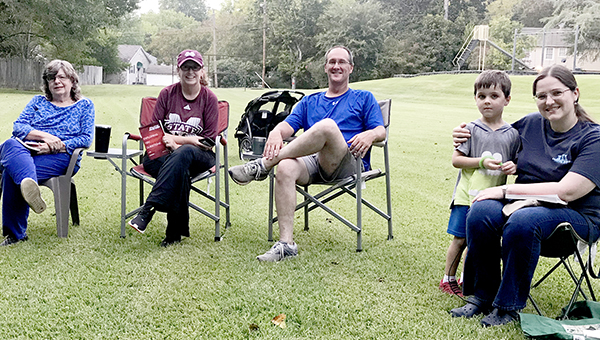 First Baptist’s driveway devotionals about more than a Bible study

As the sun begins to set across Vicksburg, members of First Baptist Church gather at various locations across the city for prayer, scripture and fellowship.

The church’s driveway devotionals, said Rev. Ashton Thompson, FBC associate pastor of education and administration, “Is to get people to connect, not just virtually but actually get together in a safe environment to make the social connections we haven’t been able to make due to COVID.”

While church members come together for worship on Sundays, he said, “There’s really not an opportunity to interact, so with these driveway devotionals, we can still be social distancing and have a Bible study and then we devote the remaining 30 minutes to social interaction.

“The church is a family; the body of Christ and we’re all wanting to be in fellowship and do it in a safe way,” Thompson said.

He said the devotionals are held at five different locations in the city. Some, he said, are in the driveways of people’s homes, but the majority are at different parks. The groups, he said, meet either on Mondays, Tuesdays, or Wednesdays.

“People can participate in more than one group, but generally we ask them to go to the group that’s closest to their neighborhood,” Thompson said.

While each group sets its own format to conduct the devotional, he said, each has three basic elements — prayer, Bible study and fellowship. Material for the Bible studies is provided by RightNow Media, a subscription service that provides streaming videos for Bible study.

“The Bible studies are online. Each member has an account to RightNow Media,” Thompson said. “They can go and watch the video that the group is studying and come to the group that night, and we have questions we go through.

“It’s convenient. It’s just a lot easier for people to do their Bible study on their computer in the convenience of their home or on their phone and come together in a group for a facilitator-led discussion.”

The devotionals begin at 6:30 p.m. and are led usually by a host and a teacher.

“We try to be able to let the young parents be able to get home and get their kids to bed,” Thompson said of the early start. “Everyone gets together and being in the park allows the kids to play and someone to watch them.

“What we do is use lawn chairs and separate the people so they will be safe but can still hear each other,” he said. “It’s been very successful; people say they really enjoy it because they still have Bible study and fellowship. We’ve been pleased with it.”

The devotionals last about one hour or one hour and 15 minutes, although some may run longer, Thompson said, “Because people enjoy being together.”

The only drawback, he said, is the weather.

“We’re dependent on the weather whether we meet or not,” he said, adding the program may end once the weather gets colder.

“But at least this gives us the opportunity (now) to have that gathering while we can in a warmer climate.”

It’s too important: Residents urged to self-respond to 2020 Census

If you are a student looking for scholarships, the census is important to you. If you are a parent whose... read more