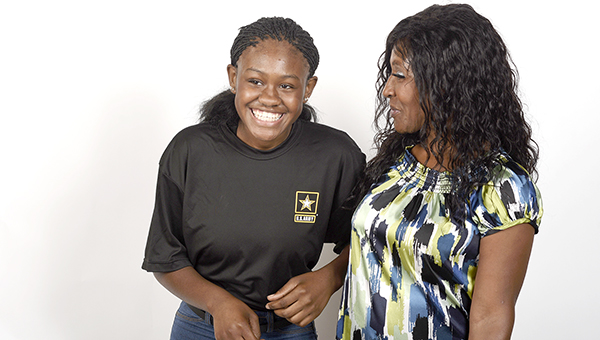 A mother’s prayer for her daughters is continually answered

Mary Pendleton is proud of her daughters.

As a single mom, she knows the challenges her family has had to face and the obstacles she and her girls have overcome.

“When I had three girls my prayers were not for money or fortune and fame, but that they would grow up and make something out of themselves,” Pendleton said.

Her prayers are nearing fruition.

Pendleton’s youngest daughter, Shawntrice, who is a senior at River City Early College High School, aspires to attend UCLA and become a doctor.

Cherese, her eldest daughter, holds a bachelor’s degree in mass communications from Jackson State University, a master’s degree in creative writing from Full Sail University, and is currently working toward her Ph.D.

And Pendleton’s middle child, Shenice, a 2020 graduate of Warren Central High School, has just enlisted in the Army.

“I saw my mother and sisters struggle to make it where we are today, but we are warriors,” Shenice said. “The most important thing in my life is to further my education and career and to make my mother proud. I also want her to know she doesn’t have to worry about her baby and she knows that by me joining the military, I will be taken care of.”

Their journey was not easy, Pendleton said, but she did manage to keep a roof over her daughters’ heads, food on the table and clothes on their backs.

Though Pendleton is proud of all her girls and their accomplishments, to see them growing up and becoming the women she had hoped they would is bittersweet.

“God blessed me with these kids and now I have to turn them back to Him. I know I can’t continue to live inside of them and make decisions for them,” Pendleton said. “They have to grow up and make their own decisions, but there is a part of me that just doesn’t want to let them go.”

Cherese, who worked for the city of Vicksburg as a videographer and editor, has already moved on. She now lives in Houston, Texas, and is employed by League City, which is in Galveston County within the Greater Houston metropolitan area.

Shenice was sworn into the Army on Aug. 24 and is now at Fort Jackson, S.C. for basic training.

Michael Wallace, who is Shenice’s father and an Army veteran, said he, too, is proud of his daughter.

“I’m proud of her. This is a positive and fantastic move for her career. This will give her an opportunity to come into adulthood,” Wallace said. “She will learn a lot and be traveling and experience a lot and see the world.”

Pendleton said she hopes her story will inspire other single mothers.

“There is a God,” Pendleton said, “and he does answer prayers.”

Electric scooters are set to roll out in downtown Vicksburg

After months of discussions, planning and changes to state legislation, electric scooters are just days away from being available in... read more