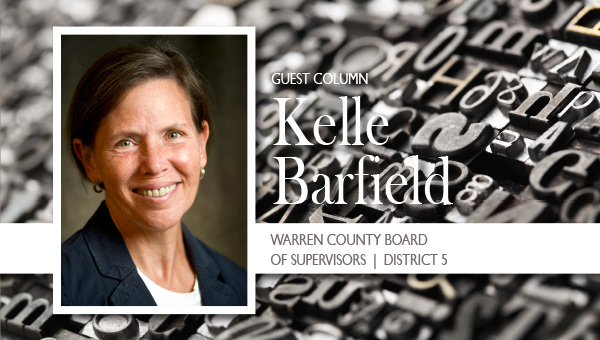 When I lift open the box of a fresh, hot pizza, the first question before me is how large a slice do I want. We all know it’s rare for the entire pie to be sliced into precisely equal portions. So who gets the biggest slice and what size do I get? Those are the same question each of us should be asking in relation to the 2020 census. How large a slice do we want?

Most folks are vaguely aware that census counts are used to determine congressional representation as well as funding for a host of things. It’s time, in the final weeks before we seal our fate for another decade, to better grasp the slice of the pie in the form of potential funding slipping from our reach.

Results of the 2020 census will help determine what portion of hundreds of billions of dollars flow into Warren County annually for the next decade. During one recent case year, 2015, Census Bureau data factored into formulas to distribute more than $675 billion in funds from 132 programs to communities like ours.

How large will our slice be of funds for infrastructure?

How large will our slice be of funds for education? Census data drives funding of programs such as Head Start, Pell Grants, school lunches, adult education and grants for preschool special education.

How large will our slice be of funds for disaster preparedness and response? Census results impact funds for programs including federal disaster relief, rescue coordination, emergency shelter grants and assistance grants to firefighters.

How large will our slice be of funds for healthcare and nutrition? Census totals translate into local dollars for programs such as Medicaid, Medicare Part B, prevention and treatment of substance abuse and Supplemental Nutrition Assistance Program.

In short, every year, billions of dollars in federal funding goes to support hospitals, fire departments, schools, roads and other resources for services and products we need here in Warren County.

A variety of reasons explain why residents don’t complete the census — apathy, uncertainty about the process, forgetfulness, skepticism of federal bureaucracy. But there really is no good reason. Do we really want these potential dollars to fail to come our way? Think of this as millions in unclaimed checks.

The census only takes about five minutes to answer basic questions including name, gender, race and age of anyone living at your address on April 1. The census can be completed via 2020census.gov from a computer or on your smartphone. No special codes are needed. Anyone without internet access can get assistance in completing the census by calling 601-634-8073, where the Warren County Board of Supervisors has made resources available to help.

Warren County stands at just over a 60 percent response rate, slightly above the state average. But Mississippi, at 59 percent, ranks 43 of 52, including states, the District of Columbia and Puerto Rico.

We are below the national average of 65 percent. Several U.S. counties have reached 84 percent response, and we can too. Even if you’ve completed the census, you play a crucial role in ensuring Warren County’s response is higher than ever before by encouraging others.

The deadline for being counted is Sept. 30. Now is the time to inspire others to action. Encourage your family, friends, neighbors and co-workers to invest five minutes to complete the census.

The pie is huge, and it won’t be cut in equal portions. How large a slice do we want?

Kelle Barfield represents District 5 on the Warren County Board of Supervisors.

Where other counties have not succeeded, Warren County has — for now. Where other schools have not been as fortunate,... read more