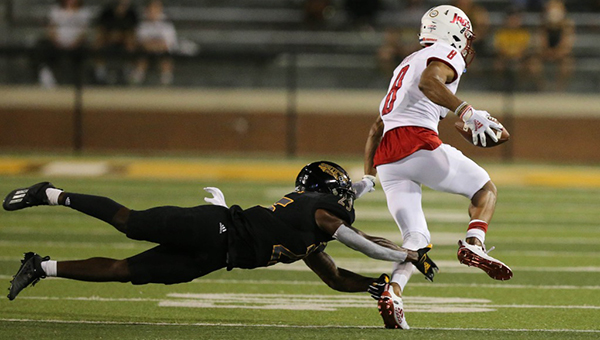 HATTIESBURG — Southern Miss kicked off the 2020 college football season by getting kicked in the backside.

“It’s exciting and gives us something to look forward to. We start the season out 1-0. I don’t remember the last time we did that, so everybody’s excited and ready to come out and continue to make plays,” Tolbert said.

It was much less exciting for Southern Miss.

The Golden Eagles lost a season opener for the first time in three years. Quarterback Jack Abraham completed 22 of 32 passes for 314 yards, and Tim Jones caught six passes for 139 yards, but Southern Miss only had 95 rushing yards and never led in the game.

“We gave up too many big plays,” said Southern Miss head coach Jay Hopson, a Vicksburg native. “South Alabama deserved to win and there’s no ifs, ands or buts about it. We have to learn from it and get better.”

Southern Miss will have 16 days to stew on the loss. It has an open date next week, and won’t play again until Louisiana Tech comes to Hattiesburg on Sept. 19 for the Conference USA opener.

Tolbert highlighted the first half with a 73-yard catch-and-run on the third play of the game. He added an acrobatic grab for a 31-yard score on South Alabama’s first possession of the second half for a 20-10 lead, after Southern Miss had gotten within a field goal at halftime.

“I knew there was no way we were up to speed like a normal season, as far as preparation. We had a couple of hit days and scrimmage days, so I was hoping we were able to tackle better,” Hopson said.

Southern Miss pulled to 29-21 with under six minutes to play, but South Alabama sealed it with an eight-play, 59-yard drive ending in a 34-yard field goal by Diego Guajardo.

A long run by Abraham put the Golden Eagles inside the 10-yard line with less than two minutes to play, but they wound up turning it over on downs.

Trotter also carried it nine times for 41 yards for the Jaguars (1-0), and Carlos Davis had 85 rushing yards.

“The biggest thing about this game was that it shows you how to persevere. If you give up early you never get the results that you reap and sow,” said South Alabama linebacker Nick Mobley, who had 15 tackles. “We worked hard and we were consistent, and that’s what happens when you do that. You win.”

Southern Miss had a touchdown negated in the first half when Gore was ruled stopped near the goal line, just before he lateraled to Abraham who ran into the end zone.

The Golden Eagles wound up settling for a 24-yard field goal by Briggs Bourgeois, one of two that he kicked on the night.

“We can’t get down there like that and come away with nothing,” Abraham said. “That’s one of my biggest pet peeves. When we get down there we have a problem with punching it in. That’s something we’ve got to really emphasize over this bye week and really improve on.”

South Alabama, meanwhile, got a nice bounce heading into its hope opener against Tulane on Sept. 12. It was also a happy homecoming for a number of its players and coaches.

“It meant a lot just from the fact that I believe I’ve spent 25 years of my career coaching in Mississippi. I’ve got three children and my youngest was born here in Hattiesburg at the Wesley Center, which I believe is about three miles from here,” Campbell said. “That, with being at Gulf Coast for 10 years, added a little something special to it.

Warren Central vs. Vicksburg 2020 is a new spin on an old favorite

Warren Central has played in the Red Carpet Bowl 27 times in its 58-year history. It’s safe to say none... read more