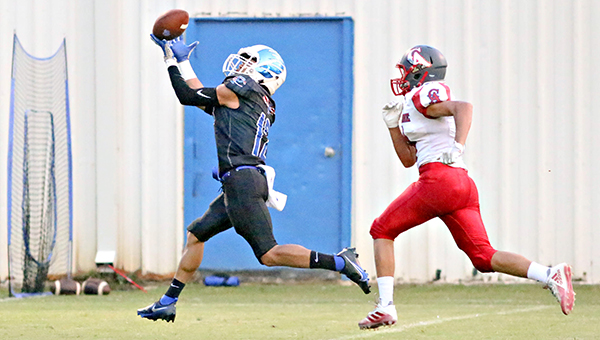 During its recent run of success, Porter’s Chapel Academy has unveiled a different offensive weapon each week. On Friday night, it might have found the biggest one yet.

Ra’Darius Turner, a transfer from Port Gibson playing his first game with PCA, caught five passes for 168 yards and three touchdowns — covering 42, 47 and 55 yards — to lead the Eagles to a 52-38 victory over Claiborne Academy in an eight-man game.

“We’re building confidence. Each week we’ve found something new. We were obviously able to expand the passing game tonight and find another dimension to our offense,” PCA head coach Blake Purvis said. “We’ve gotten better throwing the ball during this stretch. When we’re making improvements, that’s always a good thing.”

Turner was the breakout star in Friday’s win, but far from the only Eagle to have a huge night.

Quarterback Jace Riggs completed 9 of 18 passes for 197 yards and three touchdowns, and added another TD on the ground. Brayson Morson ran for 137 yards and two touchdowns, while Tyler Washington had 132 rushing yards and one TD.

PCA led 36-6 after Turner caught a pass and lateraled to Morson, who completed the 80-yard touchdown play just before halftime.

“They scored on their opening drive, and we responded very well. We got a long touchdown pass to Ra’Darius and never looked back, The offense was really clicking,” Purvis said.

PCA ran for more than 350 yards in a 43-20 win over Deer Creek last week, and the addition of Turner could turn them into a formidable offensive juggernaut, Purvis added. It’s a strange turn for a team that was shut out four times and scored a total of 100 points in 2019.

“He’s a huge threat. He gives us more depth at the receiver position. Having somebody opposite Ricky (Carraway) opens up the field a lot for us. It makes defenses have to defend the whole field,” Purvis said. “We have home run threats on both sides of our offense now.”

The Eagles will now have two weeks to tinker with the offense and make it even more explosive. They were supposed to play CHEF, a home school team from Baton Rouge, at home next week but Purvis said the game will likely be canceled because of Louisiana’s COVID-19 restrictions.

Given the momentum they’ve built up over the past three weeks, as well as transitioning back to 11-man football after two games of eight-man, Purvis said he welcomed the unexpected bye week.

PCA’s next game will be Sept. 18, at Hillcrest Christian in Jackson.

“To go into a bye week on a three-game winning streak and building momentum definitely helps,” he said. “It gives us a week to try and continue to improve, and it buys us some time before we switch back to 11-man. A lot of good things can come out of this bye week.”